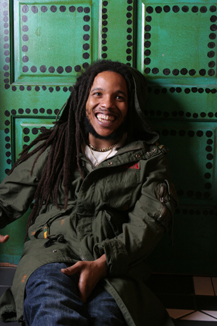 “I am music,” proclaims Stephen Marley, the second son of Bob Marley, lounging in his dressing room at House of Blues Sunset Strip before his April 26 show. “Music is in my blood.”

At age 7, Stephen joined with older siblings Ziggy and Cedella to form the Grammy-winning the Melody Makers. Since then, the 34-year-old has racked up a total of five Grammys, more than any other Marley and more than any reggae artist in history.

He co-produced both of brother Damian Marley's past two Grammy-winning albums, executive produced 1999's Chant Down Babylon , a tribute to his father, lent his productions skills to Buju Banton, Spearhead, Eve, Erykah Badu, Capleton and Mr. Cheeks and performed on Eric Clapton's album.

After three years in the making, this past March saw the light of his solo debut, Mind Control.

“The importance of this album is the message it brings,” he explains. “Especially the title track, ‘Mind Control.' [The message is] one of mental freedom.”

The CD features a variety of cameos, including Mos Def, Ben Harper and Jr. Gong (Damian), all of who will show up later that night at the show. One performer who doesn't appear on the CD, however, is Stevie Wonder, but he too will jump on stage to sing along on Bob Marley classics like “Could You Be Loved” and “Jammin.'”

“All of the people on the album, we are very close friends with,” Marley assures when asked how he picked his collaborators. “So it just happened kind of naturally. Being around us and around them.”

Listening to the artist speak is calming. As his voice rises and lowers, you begin to understand how connected he is to rhythm.

Like his father's songs that filled the years before him, Marley's music serves as a unifier. Looking around at the faces at HOB, it's amazing how diverse the crowd is.

And also like his father, he is concerned with the upliftment of the people.

“Right now [I'm] one of the people who give a special effort to supporting conscious music and make conscious music successful in that sense of the youth take it up, and it become a part of them everyday life, just like in the club. We the people have to do that for our children, for our future, for the betterment of our society so more of the people know and are responsible as a people.”

It's not hard to see why Marley feels an obligation to be socially responsible. He was with his father when Bob traveled to Ethiopia and then again in 1980 when Bob was invited to perform at the April 17 celebration of Zimbabwe 's Independence Day.

“I learned a lot of things from my father,” he shares. “I've learned that they've got so many things to say. You can't listen to people 'cause they crucified Christ. One love. One heart. One destiny. One God.”

For lyrics that sound so prophetic, it's hard to believe Marley has no rhyme or reason.

Phrases like this are commonplace from Marley. He punctuates his sentences with “yeahs” and enlightened sighs.

Right now he's touring the U.S. and has plans to stop in Europe as well to promote his latest offering. And he'll continue making music with his siblings.

“Yeah, mon. I like working with my family best,” he relays. “We are a very close-knit family. Sometimes we believe we have telepathic between lights, and that makes your job easier, more fun. It keeps you focused because there's one just like you helping to shine a greater light. Family is the greatest thing that we have. Blood.”

High among his favorite things would also be performing.

“I love to sing,” he says, his smile lighting up the room. “Connection with the crowd is part of it, but I love to sing. I love to play music. At sound check I could go on and on. So I have to remember this is not the show. We love the people. The message is for the people, yes, but at the same time the message comes out of us, so whether there is two people or 200 or 200,000 people, it's always the same. In that sense it's not about the crowd.”

Stephen Marley's legacy is great. In his short lifetime, he's experienced many amazing moments. His best?

“Right now,” he states. “I'm living it. As far as coming up true life to the point where I'm at right now, I've had great moments, but every breath is the greatest moment. The greatest gift is still here, life. Can't get no greater than that.”

As for the future, Marley answers like a true Rastafarian: He plans to “serve the Almighty with every inch of I, and I and do his will. That is the master plan. Can't beat that.”