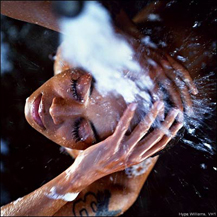 She was the Crazy component in CrazySexyCool . She was the one who promoted safe sex by placing a condom over her left eye. Say what you want, but the girl had guts and said it loud and proud that she “Ain't 2 proud 2 Beg.”

Lisa “Left Eye” Lopes appeared on the music scene in 1992, causing such a ruckus in the girl group TLC that ignoring her wasn't an option. It was impossible not to acknowledge her presence or even admire her bravado. Left Eye was tough, creative, troubled and always made sure everyone got what she was feeling.

Unfortunately, she was known more for her outside antics, arguments with T-Boz and Chilli and the infamous burning down of her ex-boyfriend's mansion, than for her musical skills. Though her voice wasn't prominent in 1994's CrazySexyCool , she wrote the introspective rap in “Waterfalls,” proving that she had lyrical chops.

Her frequent trips to Honduras were her spiritual retreat in hopes of peeling away the anger, which grew over the years. Tragically, Lopes died in a horrendous car accident on April 25, 2002. She was 31.

Director Lauren Lazin took on the challenge of bringing Left Eye's story to the screen. Last Days of Left Eye , part of the VH1 Rock Doc series and AFI's Music Documentary Series, chronicled Lopes' last days in a journal she had written and private home movies.

Lazin, who scored a 2005 Oscar nomination for her debut film Tupac: Resurrection , went through over 100 hours of footage encapsulating the Lopes no one but her close family and friends knew.

Problems with her militant father and the violent relationship she had with Atlanta Falcon football player Andre Rison were candidly revealed. Lazin discovered an artist tired of her own drama and looking for something more meaningful.

Lopes fans never heard about her work with the Lupus Foundation or how she built a children's center in Honduras. After viewing the other side of Lopes, everyone will see how truly wonderful and complicated this young woman was, and she can be remembered for the good she did.

ArcLight Cinemas is located at 6360 West Sunset Boulevard in Hollywood. The film will air May 19 at 9 p.m. on VH1.