The Many Faces of Mom: A Tribute 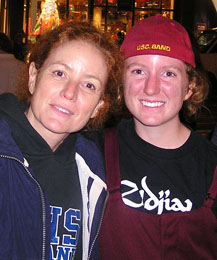 I sometimes wonder how the world views my mother. As a female executive at IBM, she plays what's traditionally thought of as a man's game. She's one of those people that believes that clear thinking and rationality should be valued above political machinations in the workplace, and she has had to prove herself at every turn to be just as smart and just as capable as the man sitting next to her at the conference table.

She would come home late some nights, exhausted from a day spent coaxing a customer, knocking sense into a coworker and finishing a project when the ball got dropped, as it so often did. When her technical team was featured in Forbes magazine, she looked the consummate businesswoman: hard as a rock in her Nordstrom's power suit, ready to beat back technological architecture issues with a mere wave of her hand.

It took me years to figure out what she actually did for a living. What's an IT architect, anyway?

Asking her was useless: her technical jargon was as alien to me as Klingon. The closest I could approximate was that she was the person who made things run smoothly in the world of operating systems and computer frameworks.

That made sense to me. She was always the one to make things run smoothly in my life, too.

In the Archibald home, there was a role reversal when it came to the parents. My dad was a self-proclaimed house spouse who stayed at home and took care of the kids when he wasn't teaching inmates at the local jail, and trust me, when Father's Day comes around, I'll be singing his praises for all that he put up with from me and my older brother.

My mom worked nine-to-five, and often longer, at her desk job with IBM long before her ascension to the ranks of the executives. It was she who had to work hard to be present in my and my brother's lives, as her job often took her on business trips where she'd be away for a week at a time.

But even when she was off to places as mundane as Texas and as exotic as Paris, Mom managed to make herself present in our daily routines through the power of her voice.

When I was little, I had a Fischer-Price tape recorder, a giant plastic thing splashed with primary colors and a little microphone that got me as close to rock stardom as you could get before the advent of “Guitar Hero.” My mother used it to record herself reading my favorite bedtime story about Persnickity the Dragon and a “Maggie Archibald Original” lullaby – her lyrics set to the classic Brahm tune.

Her words would bounce along to the tale of the OCD dragon that needed everything to be clean and perfect, inventing distinct voices for every character as the tale came alive purely through the power of her vocalizations.

Then, for the lullaby, it was deep and soothing. It never failed to put me to sleep. That little plastic contraption let me carry my mommy with me as she played her other role off in the wilds of the professional world.

When my mother was done at work, she became a child at home, telling stories and playing make-believe. Some of my clearest memories are of nights when my mother would pick me up from pre-school in our old Subaru, a puppet of Grover, my favorite Sesame Street character, perched on her slim hand.

She would tell me in her Grover-speak how the moon waxed and waned because it was eaten by dinosaurs, only to be mysteriously replenished at the end of every month. I still have that hand puppet, old and tattered as it is – only my mother's voice can really bring it to life.

If during the week I saw my mother mostly during the night, on the weekends it became clear she was a child of the sun. Born and raised in Florida where my grandfather owned acres and acres of citrus groves, mom didn't feel complete unless she was getting down and dirty in her garden. I remain fairly positive that the only reason she had children was for the free labor she could conscript if she were ever in need of a hole dug or compost rotated.

At first she wasn't too good at the gardening thing. We always teased her about having a “brown thumb” rather than a “green thumb,” but I think half of the fun for her was getting the opportunity to buy and learn about new plants anyway.

In her garden she became a goofy little girl again, all giggles and dancing to the music that she would blare from the inside speakers. It got to the point that if I had to hear Paul McCartney's Flaming Pie CD again, I'd be duty-bound to destroy it.

But even gardening had a purpose. Her gardening was a way to interact with live things, to soak up the sun for a weekend before she went back into the unnatural realm of the computer lab and stared at a dead screen for hours on end.

My mother lives in many different worlds, but more importantly she thrives in them all. At work she plays the role of a highly-trained-professional-woman where she is powerful and assertive; at home she is devoted to her children and her garden playground.

She is the best friend that I gossip with, a fount of sage advice that I consult like an oracle and a protector when the world is too big to deal with. She is a multi-faceted character and an amazing woman.

But most importantly, she's my mom, and I love her very much.