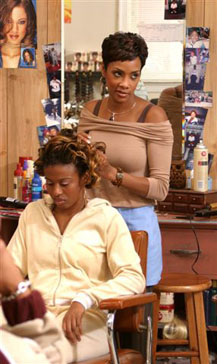 In Salon , Jenny (a vivacious Vivica A. Fox, Kill Bill Vol. 1 ), is clinging to her run-down beauty shop as Baltimore's Department of Water and Power tries to wrest it from her hands. Claiming eminent domain, Michael (Darrin Dewitt Henson, Stomp the Yard ), a devilishly handsome lawyer representing the DWP, comes knocking at Jenny's door. She must put aside her personal feelings for him as she struggles to keep her shop.

Not only is the beautiful beauty shop owner sparring with the attractive African-American attorney, but she's also contending with her son, the little lightweight, Trey (Dabir Snell, Game Over ), who has just been suspended from school for getting into a fight. When things calm down, she promises to give her son a major ass whoopin', but her mind is focused on bigger problems.

Jenny confides in Lashaunna (Kym Whitley, Fun with Dick and Jane ), one of her many employees (eight hairstylists, a receptionist and a part-time manicurist), about her difficulties with the DWP, but Lashaunna is also smitten with the handsome lawyer and tries to encourage Jenny to make a date with the opposing counselor.

Lashuanna isn't the only hairdresser who thinks Michael is sexy. Upon being introduced to him, most of the stylists at the salon want to get into the attorney's briefs.

Meanwhile, the hairdressers have their own issues. Brenda (Monica Calhoun “Everybody Hates Chris”) must deal with her abusive boyfriend, Patrick (Terrence Howard, Hustle and Flow ). Out and proud, D.D. (De'Angelo Wilson, Antwone Fisher ) faces sexual discrimination when a group of boys hurl eggs at him.

While smooth player Ricky (Dondre Whitfield, Mr. 3000 ) chases white girls, infuriating his black co-workers, even the clients have predicaments to untangle. Old codger Percy (Garrett Morris, “Saturday Night Live”) enjoys sitting around the beauty parlor chewing the fat with Ricky and ogling the mostly female staff, but his wife, who refers to Jenny's shop as the den of iniquity, wants to keep him out of the salon.

All of the plotlines collide when Jenny realizes that losing the shop to eminent domain is imminent, and the hairdressers ponder an uncertain future without their beauty parlor.

The movie has valuable lessons to impart on its audience, but, in doing so, the film is preachy. Like an episode of some '80s sitcom (“Designing Women,” “Golden Girls,” etc.), the characters break out into soliloquies, spouting off exact statistics from the top of their heads. When D.D. nearly gets gay-bashed, he launches into a diatribe about gays in the military and inequality.

There is, however, a poignant moment where Jenny learns the reason for her son's scholastic hostilities. Trey socks a white kid who tells him that blacks have done nothing of value in American History. Obviously, Jenny takes offense to the comment; she whips out a book of famous African-American heroes and teaches him about inventors, legislators and other important black people from America's history.

Director Mark Brown ( Barbershop , Barbershop 2: Back in Business ) has turned films about haircuts into an African-American sub-genre. Unfortunately, the film has many kinks to iron out. Brown weaves too many stories together to create a cohesive piece.

The director adapts Salon from Shelley Garrett's play “Beauty Shop.” He and Garrett should have taken a pair of shears to the script.

The film is overstuffed with stale stereotypes, and there are very few laughs. There are, however, many cultural references and urban in-jokes that may appeal to the same audience that found Norbit funny.