Counting Of Ballots Is Must-See TV: For Many in Afghanistan 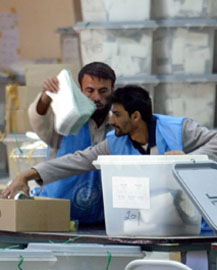 KABUL, Afghanistan – The television show seemed boring, with mumbled voices, a never-ending paper shuffle and occasionally a number such as "00177787."

But Mohammad Ishaq skipped out on his job in the afternoon on Oct. 14 to stare at this program, broadcast live on two sets in the middle of a traffic circle in southern Kabul. Ishaq, who sells apples and grapes from a cart, was riveted.

He watched as election workers opened ballot boxes, dumped out ballots and divided them piles, one for each of the 16 candidates in Afghanistan’s historic presidential election. One after another, ballots were placed on the pile of interim President Hamid Karzai. Two of the other candidates had already thrown their support to Karzai, widely considered the favorite.

"Karzai won, so clap," added Fawad, 12, who did not know his own last name. "Everyone, vote for Hamid Karzai."

Late in the day on Oct. 14, with only 25,671 votes counted of an estimated 8 million cast, Karzai had captured almost 59 percent of the vote.

It is too early to say who won. Final results are expected late this month.

As part of Afghanistan’s first direct presidential election, television sets have been set up outdoors across the country to show Afghans the ballot-counting as it unfolds. Called "The Witness Project," the effort’s aim is to make Afghans feel they are part of the process.

News in Afghanistan often springs from rumors and conspiracy theories, which eventually gain the status of fact, no matter how ludicrous. The television sets are supposed to help Afghans, many of whom do not have electricity at home, see for themselves what is happening.

On Thursday, after days of mostly filler programming, the show finally got more interesting.

Workers actually started to count the votes in Kabul, surrounding provinces and Kunduz in the north, five days after the Oct. 9 voting.

The counting had been held up by an investigation into allegations of fraud. Karzai’s opponents threatened to boycott the election, decried the poor quality of ink used to mark voters’ thumbs to prevent people from voting more than once and filed 43 complaints with an independent election panel. On Wednesday, after the United Nations-appointed panel sorted through the complaints, about 40 potentially tainted ballot boxes were set aside for further investigation. That represents about 24,000 votes.

None of the complaints seemed to raise issues that would jeopardize the election’s outcome.

In many ways, Afghans have been waiting nearly 25 years for this, through wars with the Soviet Union and each other, through years of rule by the repressive Taliban and almost three years of fragile peace since the fall of the Taliban, who threatened repeatedly to disrupt the election.

Standing in front of television sets on Thursday, many Afghans were impatient, worried that fighting might start again if the results were not announced soon.

"We don’t know about our future," said Ajmal Raufi, 18, a tailor. "Of course everyone is concerned. We want the results very quickly. We want to know when peace is coming to our country."

The U.N. project has sent out 144 television sets, all 29-inch Sanyos, to spots in Kabul, Kandahar and provincial capitals nationwide. They all play feeds from Radio Television Afghanistan, which expanded its coverage for the election. The channel shows people in Herat the vote in Kabul, and people in Kabul the vote in Gardez, and people in far-flung provinces of this fractured nation that they all live in the same country, a concept of nationhood difficult for many Afghans to embrace.

If the project goes well, the television sets will be stored after the results are announced and set up next spring for Afghanistan’s parliamentary elections, which could prove far more controversial than the presidential balloting.

But The Witness Project has some kinks to work out, especially outside Kabul. The glare from the sun made many sets almost impossible to watch. Others seemed hidden, difficult for people to find. The wind knocked out the satellite dish on at least one; others did not have the proper receivers. When some were turned on, they started to smoke. Some people were afraid to gather around certain sets, still nervous about the threats of violence. And governors and police stations in some provinces had "appropriated" the sets for their own use.

"People are just going to steal them, or they’re going to get damaged," said Daniel Bayes, the U.N. official in charge of the sets in three provinces north of Kabul. "It was a decent idea in theory."

In a town six miles from Kabul, named "Cheap Price" for its inexpensive land during the communist regime, the two allocated sets were locked in their red boxes, tucked behind hanging pieces of meat. In Charikar, the capital of Parwan province, two police officers guarding the sets said it was tiring duty.

But at the traffic circle in the southern Kabul neighborhood known as 40 Pillars, people left work to meet at the television sets. Kids skipped school to watch. One man rode up on his bike, still wearing his button showing Karzai releasing a dove.

"Is it forever, or is it just for the election?" asked Mohammad Salem, 18, who had worn the button every day for a month. "It would be good if we had them forever."

The sets in the traffic circle had turned the area into a town square of sorts, where people talked about the election and watched the results, even though one police officer said his favorite part of the programming was the occasional "Tom and Jerry" cartoon.

Many in the crowd had voted and still had the ink on their thumbs to prove it. They had television at home, but not electricity and used their generators for only a few hours a day. They had fun watching with other Afghans.