Parker Posey: Plays the Spy Who Doesn't Love Him in Fay Grim 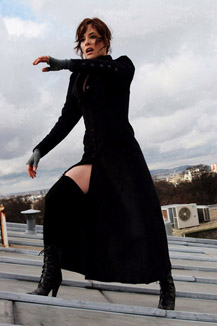 While sitting across the table from writer/director Hal Hartley and actress Parker Posey at a recent press junket, it's easy to see how much these two talented individuals respect and admire each other.

This month they're promoting Hartley's newest production, Fay Grim , the long-awaited sequel to 1998's Henry Fool , which won the Best Screenplay Award at the Cannes Film Festival. ( Henry Fool focused on an eccentric garbage man named Simon Grim, who becomes a famous poet with the help of Henry Fool, a roaming ex-convict.)

Hartley and Posey (who plays Fay Grim) agree that this film is a “mythological tale.” When making Henry Fool , the cast and crew joked about creating a sequel.

But it wasn't until 2002 that Hartley actually thought about turning his second story, based on the character of Fay, into a real project. He made a call to Posey to ensure she was onboard. She welcomed the opportunity, and Hartley began to write.

Fay Grim opens seven years after Grim's husband, Henry Fool (Thomas Jay Ryan, Eternal Sunshine of the Spotless Mind ) has gone missing. In the opening scene, Fay appears, sitting in a church reading a book titled How to Pray , while smoking a cigarette

Now a single mom living in Woodside, Queens, she seems to struggle to get through everyday life. Constantly reminding everyone that she's single, Grim tries to look beyond her promiscuous past while raising her 14-year-old son, Ned (Liam Aiken, Stepmom ).

Fay's main goal is to keep her son out of trouble, but after he brings a pornographic, binocular picture box into school, he gets expelled. She inevitably worries that Ned will turn out to be just like his father.

Then Fay receives a visit from CIA agent Fulbright (Jeff Goldblum, Jurassic Park ), who explains that Henry may be someone different than he led her to believe. Henry's written confessions, a series of eight handwritten notebooks, are highly sought after by U.S. intelligence agents. Fulbright insists that Fay find these books as a matter of national security.

With the help of her imprisoned poet brother, Simon Grim (James Urbaniak, Death of a President ) and his publisher Angus James (Chuck Montgomery, Mona Lisa Smile ), Fay sets out on a caper to find out more about her husband's secret life.

Touching on political issues in America today, Hartley places his main characters in a messy world, where they merely long for a normal life.

“I wanted [ Fay Grim ] to be reflective of the time and place that I'm living in,” Hartley explains about how he chose some of the underlying themes of the film. “When writing the film, I collected newspaper clippings on a daily basis, and the various articles about espionage always peaked my interest.”

Though critics questioned whether Hartley could produce a worthy sequel to Henry Fool , he does a fantastic job, and audiences will walk away with thought-provoking lessons to apply to their own lives.

A witty character, Fay has the best of intentions, but she's no 007. Yet, Posey explains, “Fay becomes her own superhero in this movie, and through her experiences, becomes more calm and resigned in the end.”

Posey, who was merely an indie film star in 1998 when Henry Fool was shot, is now a household name. Even with this growing popularity, playing a part in an independent film has become second nature to her.

“Most people on set make fun of me because I know how to use a C-stand better than the grip crew,” she laughs.

As to whether they'll be a third and final film in this series, Hartley has already started to throw ideas around for the next film.

“The third film, which will cast Ned Grim as the main character, might not be the last,” he reveals. “There might be more stories about the Grim family.”