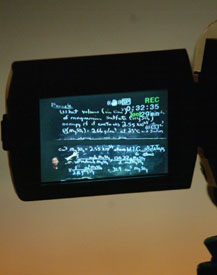 Professor Joe Kappock’s fear of an empty classroom came half true last year when just 55 of the 90 students registered in his biochemistry class at Washington University in St. Louis showed up one day.

He had worried his morning-challenged students might make a habit of sleeping in instead of attending his 9 a.m. class, because they knew a camera in the back of the room was taping everything he said. And they could watch the tape whenever they wanted by clicking on the video online.

Most students still get something out of the arcane habit of attending class in person, he said. But for those who prefer to sleep instead, he shrugs.

"I don’t like to preach to an empty room," he said, "but I’m there to do what students need me to do to best help them."

Those who skip class have always figured out ways to get by. But as more colleges and universities begin experimenting with streaming video and audio, some people are asking if there is a point to going to class these days. And sometimes, professors are asking the same thing.

"I will admit it has crossed my mind: ‘Why not videotape it from home and stream it online?’" Kappock said.

Streaming lectures online for the benefit of on-campus students has grown out of the technology used for distance learners at many universities. The quality varies from campus to campus, from basic no-frills tapes that look like home videos to some productions that rival the evening news.

Professors say they hope recorded lectures will improve learning by providing students with flexibility. Students can get material if they have to miss a class because of a religious holiday, a track meet, a medical school interview or the flu.

The tapes offer help for international students for whom English may not be their first language and for students who have trouble concentrating in class, educators say. Other students who do not quite grasp a concept the first time can watch that part of the lecture again.

The technology is used differently on each campus and by each professor. Most say it is a supplement rather than a substitute for class. But some administrators say it is also being used to help relieve crowding in some big lectures at the University of Illinois at Urbana-Champaign or to help students who need to take two classes that meet at the same time.

For Benjamin Staffin, it was one long, slippery slope.

Waking up for his 9 a.m. computer science class two summers ago didn’t jibe well with his nocturnal schedule, the University of Illinois junior said. Then he was sick one week and missed seven hours of class. He was not worried, because he had the streaming videos. But he did not show up the next week either, figuring he could watch them later. The lectures piled up – fast.

"And now I have 14 hours of video to watch, and I’m completely in over my head," he recalled.

It spiraled down to a big fat "D" on his transcript. So he is taking the class over this semester. And he is going to try something new this year.

"My strategy is to go to class," he said. "There is a reason that class exists. Going to class is good."

It also doesn’t hurt this class meets at 3 p.m.

Educators acknowledge recording classes might give some students incentive to stay home. But Patricia Phillips-Batoma, director of instructional computer for the University of Illinois’ chemistry department, is not too worried.

Her department began experimenting with videotaped lectures last year in organic chemistry class. Phillips-Batoma said she was amazed by the amount of traffic on the server. The most popular time for students to click on it was at 3 a.m., usually the day before an exam.

Washington University has been videotaping some large lectures since the early 1990s. Until about four years ago, students had to go to the library to view those tapes. Now, they are streamed online. About six classes are being taped this semester, mostly large, introductory lecture classes such as chemistry and biology.

Gina Frey, director of Washington University’s teaching center and a introductory chemistry professor, knows that some faculty members have complained about students not coming to class, but she has not noticed any dips in attendance in her classes. In fact, she can tell by the number of hits on the video that only about 10 to 15 percent of students are looking at it.

"We are very careful about how we tell students to use these videos. They are never a replacement for our classes," she said. "... It’s not the best way, but it’s better than no way, or having to rely on a friend’s notes."

Starting about five years ago, the University of Missouri at Rolla began streaming classes in real time as well as archiving them online. The streaming is mostly for the benefit of distance learners, but it also benefits many on campus.

At the University of Missouri at St. Louis, some on-campus students have become distance learners from their dorm rooms. A new system allows students to log into a small number of classes from remote locations. They cannot see the professor, but they can listen to the lecture on their computer and see the PowerPoint presentation or slides.

Those who like the new technology are excited about how it might change what happens in classrooms. With the possibility of pre-recording lectures for students to preview before class, the actual face-to-face time with a professor could be used more for dialogue and questions and answers.