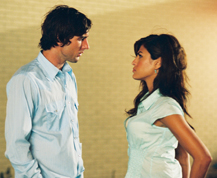 In The Wendell Baker Story , Luke, Owen and Andrew Wilson join forces to bring the world a little slice of Texas. Written by and starring Luke, co-starring Owen and directed by Andrew, the film follows Wendell, a small-potatoes confidence man who contrives schemes to get by while he figures out what to do with his life.

Before he can get an answer to his life's enigma, he gets pinched by the cops and is sent to the old grey-bar hotel. It's here that he finally applies himself, hits the books and learns the ins and outs of managing a real hotel. After he's paid his debt to society, he finds gainful employment working at the Shady Grove Retirement Hotel.

The inspiration for writing the script for The Wendell Baker Story came from various aspects of Luke's life.

“I wanted to write something, and I thought it would be really fun to write a fast-talking, upbeat conman,” the actor begins. “I'm from Dallas, and I've spent a lot of time in Austin. Driving around back then in the mid '90s, I started thinking about the character of Wendell. Then I worked on Rushmore , where I got to know Seymour Cassel.

“He looks kind of like your average older, elderly person, and then you meet him and you find out he's this crazy guy with twice as much energy as I have. I started thinking it would be really funny to write parts for him and Harry Dean [Stanton] where you have people their age – Harry Dean is 80 and Seymour is 77 – in an old folks home, with these guys who are so vibrant and they've lead these incredible lives. I thought that would be kind of a funny combination.”

One might wonder who Luke was thinking of to play this leading role when he sat down and created the Wendell Baker character. Though the film co-stars his older brother Owen, Luke doesn't stand on ceremony when asked if he'd had himself in mind all along.

“Yeah, I would think about other actors that I liked, or other characters from other movies. I always liked Kurt Russell in Used Cars, I'd think about Warren Beatty's character in McCabe & Mrs. Miller and just certain actors that are around that I like now. I always thought Brad Pitt could do a funny job, so I'd really think about other people doing it, and it just kind of enabled me to relax and just write it as if it wasn't for me, while at the same time knowing that I'd play the part.

“That's not to sound convoluted,” he clarifies, “but that's kind of how I was thinking, just mimicking other people.”

The youngest Wilson brother had fun writing his brother's role as well.

“Owen's character, I had definitely written for him,” he recollects. “I just thought he'd be really funny playing a comedic bad guy. Seeing him in stuff like Meet the Parents , I always knew that he had fun playing jerks. That he got a kick out of it, and he ad-libbed and stuff like that.”

During the shooting of the film, Luke ceded the directing duties to his oldest brother, Andrew, who learned a couple of things about his baby brother.

“I couldn't believe how tough Luke was just because when we were growing up together, I was a lot older. I'm seven years older. I didn't even know.”

Andrew adds with a belly-laugh, “I thought he was just a kid from the neighborhood that was just eating dinner with us all the time, but then when I saw the dedication that it takes to write a script ... There are a lot of scripts out there, but there aren't a lot of good [ones], and to see how hard it is to write something good and then to get it made. He [Luke] wrote it and to a large extent got the money to make it, so I have a whole new admiration for him.”

Although he's been on the planet longer, Andrew's career in film has been primarily behind the scenes.

The eldest Wilson expounds on how he fits into the family business: “I worked on Bottle Rocket with these guys, which was the first thing we'd done together. I just had a smaller part on the periphery. This is the first time I've been involved in such an important way by helping Luke direct it. It's been great.

“They're my brothers so I'm incredibly proud of them. I have a kid who's eight, and we'll drive down the road and see Owen on the side of a bus. Both of us are like, ‘Look, there's my brother!' and he's saying, ‘There's my uncle!' So it's fun for me to see these guys have success. I've enjoyed watching their work as much as anybody else. I've been doing smaller things with them, and I hope to continue to do stuff together.

Both life and work have always been a family affair for the Wilsons.

“We lived together in Dallas past an appropriate age for three men to live together,” Andrew shares. “And then Owen and Luke lived together even beyond that out here in L.A. I had a girlfriend, oddly enough, but these guys, I don't know what they were up to.”

“It was like ‘Three's Company,' but all guys,” Luke chimes in.

Age differences and appearances apart, though they're blood brothers, none of the Wilsons look that much alike at a glance. It's still easy to see that they're all cut from the same cloth, and the whole family dynamic bleeds into everything they do in front of and behind the cameras.

“I find the family dynamics are always shifting,” Luke says, while leaning in for emphasis. “It's like different governments or countries. Sometimes it's us against Owen, and then other times it's Andrew and Owen against me. I always know that if I come home and see both their cars at my house, I just keep going.”

“It's like those clichés about oldest, middle and youngest,” starts Luke. “There always seems to be a grain of truth to all of those, but I think moving out here, the kind of town [Los Angeles] is, it makes us stick together even more.

“One funny thing on the [ Wendell Baker set], you'd get guys on the crew saying, ‘I can't believe you guys work together. I haven't even talked to my brother in four years.'”

Not so for this crew.

Luke revels in his brotherly bonds. “I think the dynamic at the end of the day is that we all just get along and like the idea of being around each other and especially working together is really fun.”

The Wendell Baker Story releases in select theaters May 18.