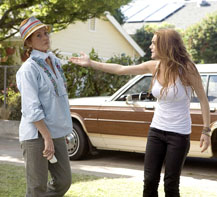 I'm not saying that Lohan's consistently scandalous public image and recent stints in unsuccessful rehab are the sole reason her performance in Georgia Rule proves believable, but it definitely doesn't hurt.

Georgia Rule tells the story of the dissolution between three generations of women, all feigning liberation, while being confined by their own overpowering stubbornness and self-righteousness. Georgia (Jane Fonda) heads this pyramid of power, followed by her daughter Lilly (Felicity Huffman) and granddaughter Rachel (Lindsay Lohan).

While apparently modeling the newest spring and summer lines, Rachel and Lilly are painted as the excessively wealthy and newly spoiled Californians. Lilly's hometown, however, is an old-fashioned, small suburb of Idaho, where Lilly sentences Rachel to a dose of respect and work ethic at the hands of her grandmother Georgia.

Georgia is an intriguing paradox of spunk and self imposed structure that leaves the audience wincing at her family's reckless abandon. According to Georgia, dinner is at 6 p.m. if you want to eat that day, and the use of God's name in vain is punishable by a bar of soap in the mouth.

On the same token, Georgia is the first to pick up a baseball bat and swing it at Lilly's despicable husband, and to tell Rachel to “go fuck yourself” in response to her incessantly bratty, witty banter.

Layered complexities permeate all three relationships: Lilly's struggle with alcoholism and her past, Georgia's struggle to remain steadfast and strong while preserving her family and Rachel's misguided, intense desire to be loved. Through a tangled web of lies, fights on the front lawn, Mormon eye-candy and tearful outbursts tinged with humor, these three women work through years of resentment and hardened exteriors to prove the cinematic point that all they really need is each other.

Although Lohan's acting is a bit over the top and appears seething with real life likeness, I despise her character for three-fourths of the movie, proving the filmmakers point. Rachel is obnoxious, ignorant and full of herself; strutting down Idaho roads in skintight pants and plunging necklines that muster no sympathy for the 17-year-old. That said, her character is established this way to complicate opinions of Rachel's integrity, while furthering the integrity of the film as a whole.

The film attempts to leave every plot point strategically open-ended. While the narrative develops reasonably through the first half of the film, the second is bogged down with unanswered questions that no longer intrigue the audience, but merely frustrate them with each revisit.

Magically, the film's conclusion turns its back on the overall appealingly unorthodox narrative, as if with one swoop of a pink bow all's well that ends well. However, filled with dramatic outbursts and shameless actions that appeal to our darkest niches of restraint, this film is entertaining and fast-paced.

I'm also glad to see Jane Fonda back in business. But who isn't?