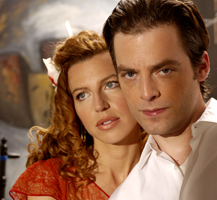 I'm not sure what the actual numbers are, but I'm sure the number of people coming out to L.A. to snag their piece of the Hollywood dream is in the millions. Margie Chizek is no different.

Chizek (Tanna Frederick) leaves Iowa to seek the fame she so rightly deserves, at least in her own mind. After a few mishaps, she literally falls into the arms of “major producer and manager” Kaz Naiman (Zack Norman) while walking his dog Moxie in the park.

Just like a neatly packaged fairy tale, Margie moves into Kaz's guesthouse in his lavish home in the Hollywood Hills, which he shares with his partner Caesar (David Proval), meets Robin Mack (the always hot Justin Kirk), who's the latest thing in movies, and in a short time, she's living the Hollywood dream.

She's knee-deep in quirky people and the infamous parties where talking bullshit and air kissing are served with a lecherous smile. Margie gets everything she has ever wanted.

The yellow brick road becomes tarnished, however, when a visit from Margie's Aunt Bee (the awesome Melissa Leo) reveals a devastating secret Margie hides from everyone, including herself.

Hollywood Dreams most certainly lives up to its title. Everything that happens to Margie after her fumbles is literally surreal. Through her experiences, people from the outside have a chance to see more or less what it's really like to climb Tinseltown's ladder.

The problem is not the movie's absurd premise. We all need a break from hardcore drama.

After the first hour, it's hard to root for Margie because she's annoying and a little out there. Some may call her quirkiness charming, but others see it as irritating.

Frederick does a good job of fully utilizing her character's naivete, proudly telling anyone who will listen that she's a great actress, and she literally destroys the ideal of the dim and busty blonde with her sincere, B-cup, wild redhead persona.

Margie does have moments of normalcy, but it's not enough. Once you get past her idiosyncrasies, enjoying the movie isn't a problem.

Her journey into fame has an inevitable price, which she's more than eager to pay. Margie is one of those people who's sure her dream is worth pursuing, even when it blindsides what's really important.