Campus Circle > Music > Interviews > Against Me!
Archives
Music: Interview [Against Me!]

Against Me!: Goes Against the Grain 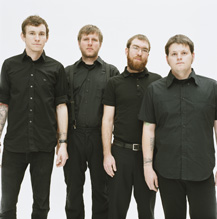 In a time when many bands sound derivative on a hopelessly massive scale, we are introduced to a group of artists with a distinct sound and scope all their own in Against Me!

Recently signed to Sire Records from Fat Wreck Chords, Against Me! has had quite the positive career turn, especially in the past two years.

The world was introduced to Against Me! in 2005 when its album cracked the Billboard Top 200 and its single, “Don't Lose Touch” broke on MTV's “10 Spot.” Opening for Green Day in 2006 only served to further elevate Against Me!, bringing a climax to the first-stage whirlwind of two years, leading to its debut release on Sire.

Yet, Against Me! has been around for much longer than most people realize, as singer Tom Gabel had originally started this band over a decade ago, by himself, playing punk-rooted acoustic songs.

Originally hailing from Gainsville, Fla., Gabel ground through the machine, elevating his art and business savvy, bringing in talented artists and maturing his music to appeal to a wider audience over the past 10 years, fulfilling that time-honored tradition that states that the overnight sensation takes a decade to create.

As for the new album, New Wave , Gabel and drummer Warren Oates play coy as to the reasons and themes for the songs.

AbsolutePunk.net describes Against Me!'s music as having “strong leftist leanings,” and although Oates completely agrees with that description, his take on the new music is more fun.

“I think we're going to take this batch of songs on the road for the next year plus,” he says, “and try to get this party started in every single city…”

Although modesty does not seem to suit him, Gabel insists on remaining true to his strong “punk rock” sensibilities despite signing to a major label, reaffirming his views that describe the current state of music as a “sea of mediocrity.”

Against Me! is certainly anything but a mainstream, candy-pop rock band or your brother's punk rock band. In its most recent show opening for Mastodon at the Wiltern Theatre in Los Angeles, it electrified the crowd.

Infused with powerful chords, infectious chanting and Gabel's distinctive signature voice, which serves only to enhance and empower the sometimes-charged lyrics of seizing change and opportunity, Against Me! stole the show from Mastodon. The audience cheered while screaming every lyric to every song with passion and commitment.

When asked about a recent quote about the popularity of bands like Panic! At the Disco (or “insert any band name there, really” he quipps),Gabel's reply is a quick and pointed: “Why should you be complacent with other people having a louder voice than your own when you have something just as valid or way more valid to say?”

Gabel continues by expressing that people need to challenge the mediocrity they have been handed and demand more from their music and their artists.

With good music being a “definite priority,” Against Me! is deftly trying to strike a balance between creating a fun, enjoyable experience for fans new and old, while staying steadfast to its original themes and positions.

“When one of the punk scene's ideas start to take off and actually become a reality, they get afraid of success or that happening and end up self-destructing it,” says Gabel.

Against Me!'s members are not afraid of success. They, in fact, embrace it.

Against Me! is not your cookie-cutter pop-punk flash in the vein of other more well-known and eye-linered “punk” artists.

The makeup and fireballs are all distractions from the main point, which is the rock 'n' roll-infused politics that has become pervasive in today's alternative scene. Yet most of its practitioners fail to comprehend completely or actually engage in the very thing they preach, which is not true with this band.

With Against Me!, the music is a blend of powerful, southern-influenced rock 'n' roll with the punk grit and political sensibilities, without all of the pomp, glitz and glamorous filler.

Against Me! proves it can be rock, punk and have a pop appeal, plus it shows no signs of slowing down.

You can catch Against Me! on tour now with Mastodon in the United States. Next on the list is Europe and Australia, then a return home to celebrate its new Sire Records release and finally, it heads back on tour for the next year.