Summer Filmfest Breakdown: The Season Heats Up with the Biggest and Brightest 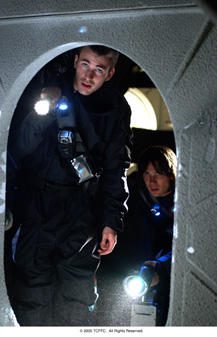 May 24 @ UCLA UCLA will jumpstart the season with its own short film festival, Shorttakes. Shorttakes is a one night event (Thursday, May 24) that showcases short films from UCLA students, as well as students from colleges and universities throughout Southern California.

The Whitefire Theatre is located at 13500 Ventura Blvd. in Sherman Oaks. For more information, visit www.crossculturalfilmfestival.org.

The festival's goal is to play an integral role in discovering and launching independent films and filmmakers by bringing them to the attention of the industry, press and public. The festival has become an annual Mecca for the Black Hollywood creative community and has been affectionately called “The Black Sundance.”

Head on down to the Fine Arts Theatre premiere of this Hollywood film festival that highlights and promotes the best in Greek cinema. More than 20 films will be screened, and the first Orpheus Awards will be given for Best Dramatic Feature, Best Documentary, Best Short Film, Best Direction, Best Cinematography and Audience Choice.

This city-sponsored event is open to all filmmakers between the ages of 12-18.

This 10-day gala presents the best of American and International cinema, screening over 175 narrative features, documentaries, shorts and music videos. The festival has grown into a world-class event, uniting new filmmakers with critics, scholars, film masters and the movie-loving public.

Kasi Lemmons' Talk to Me will be featured as the opening night film. The closing night film will be Danny Boyle's Sunshine .

Festival passes for the 2007 Los Angeles Film Festival are already on sale, and tickets to individual screenings will be available for purchase later this month. Tickets can be purchased by calling 866-FILMFEST (345-6337) or by logging onto lafilmfest.com .

This film festival offers the best films in the gay, lesbian, bisexual and transgender community. It also carries the unique distinction of being the oldest continuous film festival in Los Angeles. Outfest also offers Outfest Wednesdays, a weekly program with screenings of LGBT films from around the world.

Santa Monica is home to many film industry professionals and independent film production companies. The festival screens the work of independent filmmakers from around the world.