Shadowing Shelby: A Look at the Life of a Real Speed Racer 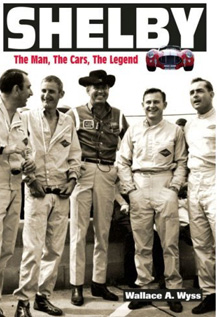 As a journalist specializing in cars, I've spent years writing about one man, Carroll Hall Shelby, a legendary figure in the sports car world. This past April saw the release of my book, entitled Shelby: The Man, the Cars, the Legend , a business bio that chronicles his half-century in the car biz.

You might ask: Why spend so much time on one old guy? (He turned 84 on his last birthday.) The answer is simple: There's no spokesman in the world of sports car racing that's more exciting than Shelby.

The idea for this book came to me in such a vision that I sat down and wrote the 57,000-word text practically nonstop, in a mere 10 days.

What makes Shelby so fascinating is that he is a man who has packed so much into one life. His occupations alone are endless, i.e. chicken farmer, cement contractor, dog breeder, horse breeder, flight instructor, test pilot, race driver, owner of a wheel company, cattleman, oil worker and on and on.

Shelby was born in 1923 in a small town near Dallas, Texas. He was a failed chicken farmer in 1954 when he decided to start road racing sports cars.

He could never afford his own sports car, but his race driving was so good that wealthy sportsmen began sponsoring him. Only five years after he first entered a competition, he won the most famous sports car race of them all, the 24 Hours of Le Mans in France.

Shelby was a real “wheeler dealer” in the classic Texas sense. As Texans would say, at the time Shelby got his Cobra project going, Shelby was “all hat and no cattle.”

With an “aw shucks” manner that masked his shrewd business acumen, in 1962 he managed to hornswoggle Ford into giving him engines on credit and then parlayed that into convincing a British automaker, A.C. Cars Ltd., that he had Ford backing him to build sports cars. A.C. began sending him the A.C. sports car, into which he jammed the Ford V8 to create the immortal Cobra.

Next, Ford asked him to pep up the Mustang, so he created the GT350, a car, that when brand new, seemed so rough and ready it was like a used race car. It gradually got more refined and by 1970, it and its big engined sister car, the GT500, were luxury cars with little appeal to gearheads. Over 14,000 had been sold by this time.

Shelby is also famous for helping Ford with its GT40 race car. In 1963, Ford Motor Company had tried to buy Italian automaker Ferrari and failed. So in 1964, Ford built its own endurance racer called the “GT40” because it was 40 inches tall.

Ford failed in every race until 1965 when Shelby reworked the vehicle and made it into a winner. GT40s won Le Mans for four years running, '66 through '69.

Shelby then went off to Africa to found a game ranch and only reappeared on the car scene a couple of decades later as a guru of speed for Chrysler. He tried mightily to move the taste of American car enthusiasts from rear wheel drive, V8-powered, ground pounders to front-drive, turbocharged, four cylinder cars.

He created thousands of Shelby Dodges, though his heart was still with the V8 groundshakers. In fact, the last car he advised Chrysler on was the Viper, a V-10 powered two-seater that was more or less a clone of his original rawboned Cobra.

Only in 2002 did Ford realize that, of anybody it could retain as a consultant to sell its performance models, nobody was better qualified than Der Snakemeister. So the corporation signed him on just as it was getting ready to premiere the Concept GT40, a modern reincarnation of their world-beating '60s racecar. That 200-mph-plus show car became a production model in 2005 with over 4,000 sold through the next year.

Shelby is on a helluva roll for a guy whose health has been precarious for decades. He's had two heart transplants and one kidney transplant. His former employees joke that, like his cars, Shelby is “made out of old junk parts.”

Yet he still flies about the world making appearances as the guest of honor at various races, raises an African breed of Tuli cattle at one of his Texas ranches, visits his multitude of grandchildren and runs half a dozen companies with his sixth wife, Cleo, a British woman less than half his age, by his side.

Shelby: The Man, the Cars, the Legend is 208 pages because it takes a heap of words to capture this legend in print.

Shelby: The Man, the Cars, the Legend is currently available. Wyss is the co-host of “Autotalk” radio show, which has run every week on KUCR-FM Riverside for 13 years.