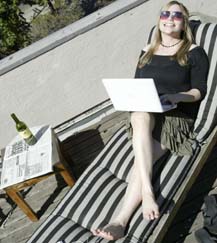 The Daily Cal’s popular "Sex on Tuesday" column welcomed University of California, Berkeley students back to school with frank talk about morning-after manners and the etiquette of the "half-night stand" – sneaking out before the sun and the bed-owner rise.

And Yvonne K. Fulbright, the 29-year-old doctoral student who writes the "Sexpert Tells All" column for New York University’s Washington Square News, is so well-known that she was invited to speak at freshman orientation.

From California campuses to the Ivy League and Big Ten universities in the nation’s heartland, student sex columnists – nearly all of them young women – are spicing up college newspapers and pushing the boundaries between entertaining and advising.

For a generation exposed to TV shows like HBO’s saucy "Sex and the City," the columns are must-reads.

"It’s a lot of advice on technique and pleasure," said Sonia Chen, 22, a fifth-year student at Cal who has been reading "Sex on Tuesday" since she was a freshman. "It’s like anonymous sex advice. You don’t have to ask your friends questions because it’s in the campus paper."

But others, including parents and alumni, are aghast at the frank and sometimes explicit nature of the columns, which discuss everything from orgasm to tantric sex to G-spots – and that’s just for starters. Some adults have expressed concern about the soundness of the advice, but many students say they find the columns both entertaining and informative.

Some columns are humorous essays based on interviews with students and the writer’s personal experience, while others follow a question-and-answer format. While critics worry that the columns reinforce stereotypes that college students are promiscuous, others argue that the trend toward "abstinence-only" campaigns in high schools means that many students arrive on campus starved for information because they’ve had little-to-no sex education.

At Humboldt State University in Arcata, Calif., the Lumberjack newspaper’s "Sexually Speaking" column has been written for five years by Melinda Myers, a 43-year-old psychology professor who teaches courses on human sexuality. She is the only non-student columnist at the paper.

"College students are absolutely having sex, but they don’t know the first thing about it," said Myers. "Last semester, a female student in one of my courses asked if it was true that drinking Windex after sex meant you would not get pregnant."

There’s no accurate tally of how many campus newspapers run sex columns: many, including The Spartan Daily at San Jose State and ,i>The Santa Clara at Santa Clara University, do not have them.

And as the fall semester gets under way, some college papers are facing criticism both on and off campus.

The debut sex column in the Spectrum at North Dakota State University caused a furor among adults in the surrounding Fargo community. The just-launched column by "Allison Moorhead," the pseudonym for the female writer, was barely noted by the school’s 12,000 students. But the column about oral sex outraged the larger campus community, and many adults bombarded the paper’s editor with angry phone calls.

"I’m scared every time the phone rings," said Matthew Perine, the Spectrum’s editor, who says he is torn over whether to tone the column down or allow a local alternative paper to run it unedited instead.

Though the various columns invariably offend some people, most university administrators steer clear of regulating the editorial content of student-run publications. So far, no one at North Dakota State has pressured the Spectrum to drop the column, and other staffers have leapt to its defense.

But critics, including some campus health professionals, warn that the freewheeling content of the sex columns could unintentionally increase pressure on students to engage in behavior for which they are not emotionally prepared.

"Most of the sex columns are written by student journalists or columnists who don’t have, other than their own dating experience, any clinical training in sex education," said Tom Rolnicki, executive director of the Minneapolis-based Associated College Press, a national membership organization for college student media, who said that the columns are well-read in part because of their salaciousness. "There is some shock value involved."

Others warn that the columns are overwhelmingly written from a heterosexual perspective, with little regard to gay students or students who choose not to be sexually active.

The Daily Cal’s "Sex on Tuesday" column first appeared in January 1997, making it the first campus newspaper in the nation to have a sex column. This semester it is written by Sari Eitches, a 21-year-old pre-med student who plans to specialize in obstetrics and gynecology.

"I want to keep it entertaining, because that’s the best way to get information across," said Eitches, who writes about half-night stands as well as practical advice, like informing readers that emergency contraception is available on campus. "There is so much misinformation about sexuality and sexual health out there."