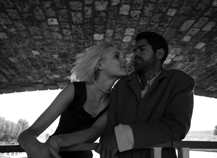 Rule No. 1 for entertainment journalists is much the same as it is for priests and CIA operatives; never fall in love. But while I may be a man of the printed word, I am still a man.

And in meeting Rie Rasmussen, the Danish ex-model, filmmaker and artist plucked to star in Luc Besson's “adult fairy tale” Angel-A , I found myself googly eyed and slack jawed in a manner I haven't really had to reckon with since middle school.

But first the film; an endearing and considered guardian angel tale, equal in both drama and whimsy, all set against a gorgeous black and white Paris. As the diminutive male protagonist André, played by French-Moroccan comic Jamel Debbouze, reaches the end of his rope, indebted to a variety of city o' lights low-lives after a lifetime of petty scheming and internal dishonesty, he attempts suicide, jumping off a bridge into the Seine.

Instead of doing himself in, André comes across and saves Rasmussen's Angela, an imposing (and somewhat drenched) supermodel type who immediately pledges fealty to the bundled and untrusting André for saving her life, setting the two on a path to solve André's problems via Angela's powers; supernatural and otherwise.

Rasmussen is quick to offer up a variety of possible interpretations of the film. On one hand, she says, “[Angela] might be the part of his soul that lets him love himself; I arrive at the point where there is no return for Demel.”

But there is room left open in the film for the possibility that “André could have invented me to save himself; I could be the part of him that allows him to accept who he is.”

Although aspects of the film evoke the fantastic or supernatural, writer and director Besson ( La Femme Nikita , The Fifth Element ) wrote it as a confessional of sorts.

“I'm pretty naked in this film. I'm 45 years old, and I talk about this man who lies all his life and decides not to anymore; which is pretty much the story of every man.”

In telling a story so close to himself, Besson was compelled to make it in French, saying, “Because I was so naked, to be in France – to be in Paris – was closest to me. [The film] would lie more in English. It would be another way of hiding myself.”

What is not hidden, but rather on display in glorious fashion is Paris herself, whose presence is so pronounced and evocative, she is effectively the third protagonist. Of course, Besson was aided by the aesthetically adept Parisians who built the city.

“They built the city at the time where electricity didn't exist, so they were very careful with light. The angles of buildings they stud[ied] winter and summer [to see] how it's working. It's such a pleasure to shoot in this type of city, you just have to wait for the right hour, and it's magical.”

These qualities are expressed first in the fact that she did not speak any French before shooting this film. She just learned French in a couple months to play a lead in a film that is entirely in French. It's not just attractive; it's impressive.

When asked if her bizarre language acquisition skills had anything to do with being a model, she drops this little punk rock pearl, “No, the dumber you are as a model, the better you are off because you are treated so, and the people before you have laid the groundwork, so if you're dumb everyone will love you. But if you've got something to say, you might as well walk out, 'cause it's never gonna happen.”

My devotion is driven home further by her dismissal of the fashion world: “We've all put clothes on in the morning and styled ourselves;” Her dismissal of the acting world: “It's playtime. We've all been kids;” The light coating of humility she wears like a crown: “I'm not that tall; especially for Danish people. I'm five feet 10 and a half inches.”

Then there's the short film she put out (at like, Cannes and the superlative coffee table book of her sketches and photos).

Clearly, my objectivity is as shot as my heart. Apologies to Monsieur Besson, the film is nonetheless a delight and the seed of my current inspiration.

And to Rie, wherever you are: thank you.

Angel-A releases in select theaters May 25 .