Paprika: The Kind of Girl Dreams Are Made of 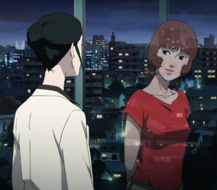 For years, literature has been brought to life by the movies. Books are constantly made into films. Recently, the tide has shifted more toward comics and graphic novels; Sin City , 300 and Spider-Man , to name a few.

Paprika was created by Yasutaka Tsutsui, a legend in the Sci-Fi novel world, and was first seen in a women's magazine, Marie Claire, in 1991. Two years later, Paprika was up for an award for Japanese Sci-Fi.

It failed to win, but went on to be known as the “Phantom Winner of the Japanese Sci-Fi Award.” This was the last piece of literature put out by Tsutsui before he went on a writing-strike to protest an excessive, self-imposed restraint on Japanese publishers.

For those of you not familiar with Paprika , here's a brief summary. In the near future, a new psychotherapy treatment called PT is invented. Through a device called the DC Mini, people can enter your dreams and explore your unconscious thoughts.

Just before the bill authorizing the technology is about to be passed, someone comes in and starts causing a lot of trouble to keep it from being mass-produced. Doctor Atsuko Chiba must enter the dream world as her alter-ego, Paprika, in order to find out who is trying to undermine the invention.

Paprika , the movie opens with a storyline that'll grab your attention. Visually refreshing, a viewer can't help but sit back and just go along for the ride. The focus is dreams, and if you try to think about it while you're watching the movie, you're going to miss the whole point.

The director, Satoshi Kon, was a huge fan of the series before he was asked to direct the project. Kon's being a fan was what really made this movie work.

From a fan's perspective, you can see it in short form and still appreciate the little aspects that only the loyal understand. Kon felt that being chosen to direct the film was an honor since he'd been dreaming about this moment for years.

Though Tsutsui comes on for a character voice, he didn't see any of the film until it was completely done. He wanted to sit back and let Kon do what he pleased. Once again, he recognized that it was in a true fan's hands.

The mood of the piece comes from the traditional style of suspense.

“It was important to make you feel like you were reading the book at the same time,” says Kon. “I wanted the viewer to feel like he had to turn the page even though he didn't want to.

“Capturing suspense with an actor is easy because people can relate to their face. They know how to make it look like they are scared, but with a pen; that is much different.”

So, why was Kon chosen for this project? Tsutsui answers, “I had to have him do it after watching his feature Millennium Actress and seeing the highly creative level of animation he was doing.”

And after seeing the animation of Kon's Perfect Blue, Tsutsui wanted Paprika to be next.

“Seeing my work animated made me realize that I can do so much more with what I have. Paprika must be next,” he says.

You might have to see Paprika more times than the Sixth Sense , but at least it's a cartoon. The animation alone is entertaining time after time because you always see something new. Or look at it from a different perspective.

And that's kind of what it's all about … changing your perspective.

Paprika releases in theaters May 25.