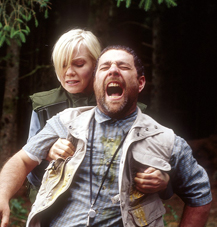 “I'm going to go home and kill me some yuppies,” is what writer James Moran told writer/director Christopher Smith one night as they were traveling on the “tube” together in London's Underground. Six months later, the first-time writer had the preliminary script for what would become the horrific-comedy feature film, Severance .

The original script was much more of a comedy than horror, so Moran asked Smith to spice it up; having had experience with the genre with his previous feature, 2004's Creep . Smith was happy to oblige.

“I read the script, and I just loved the fact that it was kind of playful. I knew that it was something I could push into a kind of political vibe, which is something I wanted to have a real good go at,” he says.

After pitching an idea for a comedic scene involving decapitation and a little known science fact involving Marie Antoinette and the guillotine, Smith got the job. Nine months later, they began filming.

The story follows a group of seven employees of Palisade Defense, an international weapons manufacturing company, who go on a team building weekend retreat in the mountains of Budapest. Their trip to the luxury lodge up the mountain is cut short when a fallen tree blocks the road. Their bus driver refuses to take them further, for reasons they might be able to understand if they spoke Turkish, and then kicks them out of the bus.

While telling ghost stories that evening, they find that a pie left in the “lodge” contains human teeth, and then Jill (played by Claudie Blakely) sees a masked man outside her window in the trees. Up until this point, the film is pretty comedic, but all the overt comedy is swept in between the lines to make room for the great horror that Smith is known for.

“I used to say it's right down the middle, but I don't think it is actually,” Smith confirms. “That's how I intended it to be, [but] it's not. It's just a horror movie that's got some really funny characters and funny bits. It is very much a horror movie, a horrific comedy.”

Every boss needs someone who will shower them with compliments; Andy Nyman plays Gordon, the office kiss-ass. Danny Dyer ( The Football Factory ) plays the role of Steve, the apathetic stoner who somehow always comes through in a pinch.

Seasoned actress Laura Harris (“24,” “Dead Like Me”) is the heroine of the film, Maggie. “I watched her on ‘24' and thought she was really great,” Smith remarks, “and the casting agent said the first name on the list was Laura's, and that was it!”

“I was just glad not to be the bad person,” Harris relays when discussing her role as Maggie in the film. “To not be the terrorist, or alien, or whatever. It was nice to just plow through and wake up still alive.”

Fans of “24” will be delighted to see Laura doing some major ass-kicking in this film, and critics will undoubtedly agree that Harris is an actress with broad range and an ability to keep up with the action and horror, while still keeping her cool and looking like she got 10 hours of beauty sleep.

Severance delivers everything a horror film should; it keeps the audience on the edge of their seat, while also easing their tension with bursts of laughter. Not forgetting, of course, the gratuitous sex scenes.

“The hookers really hooked me in at the end,” Harris jokingly admits. “I just loved them so much.”

Severance releases in select theaters May 25.