Ms. Triniti: For the Love the Independent Artist 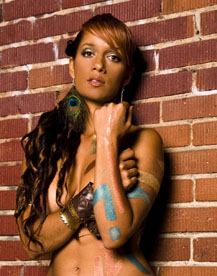 Launching a singing career seemed like a no brainer for Triniti. She had powerful vocals, the looks of a pop star, a sound that was unique, strong songwriting skills, an established mega label behind her and a manager who was known for taking Jennifer Lopez to J.Lo status.

Sounds like the perfect equation for pop stardom. But when she got dropped from her label before the release of her Ragga Hop debut in 2004 and left her mega manager, Ms.Triniti had to answer an important question: quit or take things into her own hands?

“It's funny,” she says, “I thought they were joking when I got the call. I was like the sweetheart of the label, so I was confused. At first I was like, forget this, I'm quitting. But everyone around me encouraged me to go on.”

When Ms. Triniti first came onto the scene, there weren't any female artists in the pop world who had her unique yet catchy sound. Her music, a mix of reggae, dancehall, hip-hop and R&B, was a direct reflection of her interesting upbringing.

Born to a Trinidadian father and an American mother and raised between the UK and the Caribbean, Triniti's musical dimension may have been a challenge that a corporate record label wasn't up for.

Triniti knew that she had to get Ragga Hop to the streets. So with her hard earned money, she pressed 12-inch singles of the song “Fa Da Luv of the Dancehall” and CDs of the album and was determined to get them into the right hands.

With the help of CD Baby, local club DJs and MCs like Qboy and DJ White Lightning of Jamaican Gold, she used the nightclub scene as a way to get to would-be fans and gain support from local and international selectas.

Her persistence got her a Los Angeles following where she continues to perform at hot spots like Viper Room, Keyclub, Temple Bar, Jamaica Live and countless underground clubs. She made major headway when she was asked to open up for D-12, Eminem's brainchild, as well as Ja Rule's set at the House of Blues Anaheim.   She also performed at the L.A. Reggae Festival.

At the Bob Marley festival in Orlando, Fla., she opened for Soca star Kevin Lyttle. Ultimately, she was booked to open for Sean Paul on his U.S. and Japan tours.

The Internet and MySpace, allies of the indie artist, have allowed Ms. Triniti to get her music to people all around the world. Toshiba/EMI in Japan found this musical treasure via CD Baby and gave her a record deal as well as Nice Tunes in the UK.

With all the hype from Ragga Hop , Triniti was ready to work on her second album, Do or Dare . She wanted to continue to grow as an artist, while remaining authentic. All this came true when the legendary Sly & Robbie and producer Dave Kelly agreed to work with her.

Most recently in the States, Ms.Triniti's song “Bounce Along” featuring Edee entered the Billboard Hip Hop and R&B charts at No. 16. The single has also been picked up by over 30 radio stations nationwide and is still gaining momentum.

With two albums, five videos and numerous club dates and tours under her belt, Triniti is now working on a third album.

“Being released from a major label is seeming to be a blessing in disguise. Sometimes the motivation is a challenge. It's up to me to get my ass out there, run a business and create my livelihood. I have a long way to go, but I have a music career I'm in control of, I'm happy and able to pay my rent!”