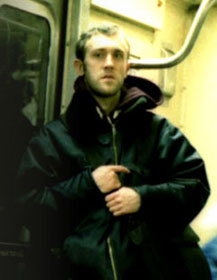 The majestic, old-era atmosphere of the Henry Fonda sets the perfect scene for this appropriately eclectic mix of performers. RJD2's newest album, The Third Hand , has caused some dissension amongst the ranks of his most loyal fans as he takes a softer approach to instrumentals and does every aspect of the production himself. RJ has no fear of challenging his audiences and developing as an artist, regardless of public criticism.

Happy Chichester opened the night with acoustic guitar and harmonica, explaining his somewhat fish-out-of-water involvement in this hip-hop tour. With upbeat crooning tales of the trials of living in a proverbial Hollywood, Chichester was originally invited on the tour as part of RJ's live band, but remained faithful to his solo album by suggesting an individual slot as well; and I'm glad he did.

Pigeon John live is impossible to compare to any other artist, as his humor and genuine talent lend his songs inspiring charisma. Playing the majority of his songs off his newest album, Summertime Pool Party , his intermittent anecdotes of self-doubt and light-hearted personal criticism separates him from the often ego ridden hip-hop pack. With catchy beats backing real life traumas of awkward love, Pigeon John brings a likable personality to the stage.

RJD2 decided to set his own precedent by taking the vibe down a notch with the feel of his new album. Though the multiple monitors, turntables, synthesizers and electronics were not completely absent from his reinvented set, RJ demonstrated his own inherent talents foregrounding his distinct singing voice and instrumental capabilities.

Alternating between his most popular dance songs and party beats with his newer more intimate songs, RJD2 demonstrated his fearless range and ever-evolving capabilities.

With a line-up stylistically across the board, this evening maintained one consistent with artists that break all genre classifications and boundaries between their personal lives and their stage lives. In a musical world full of caricatures and clichés of previously established concepts, Pigeon John and RJD2 are nothing but themselves, and not apologizing for it
Article posted on 5/22/2007
This article has been viewed 1217 times.