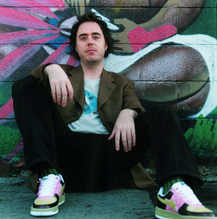 Between being a member of two local bands, touring with Latin superstars and having a song featured in an Apple commercial, more than likely Cut Chemist's superior DJ skills have caught your ear. While his name may not be instantly recognizable, this man behind the turntables goes it alone and hopes you like what you hear with his first full-length solo effort, The Audience's Listening.

Cut Chemist (a.k.a. Lucas Macfadden) is best known for his work with two unique L.A. musical ensembles. He has been behind the tables for hip-hop group Jurassic 5 and the Latin-funk outfit, Ozomatli. After over 20 years in the biz, Chemist decided to go to the lab solo to mix hip-hop beats with Latin flavors.

“I like both, working with a group and solo. I like solo right now,” says Chemist. “I like the freedom. I like not compromising what I do. But I also like trying to work with other people. It's kind of exhausting to try to think of everything.”

The Audience's Listening has elements of hip-hop, jazz, soul, funk and pop. Chemist may have picked up a few tricks on his recent tour with Latin pop sensation Shakira. His stint on the European leg of her Oral Fixation Tour was a departure for Chemist, who's accustomed to playing smaller venues.

“I think it was rough at first because I'm not used to playing to such a mainstream audience,” says Chemist of the Shakira tour. “It took awhile for me to be able to relate, but I did. And it was probably one of the best tours I've ever done.”

Between J5 and Ozomatli, Chemist is no stranger to touring. In his 12 years with J5, the group was a part of Vans Warped Tour and Lollapalooza, as well as its own rigorous tour schedule.

He spent five years spinning for Ozomatli, but departed both groups to pursue his solo work. Chemist had plans on returning to work with J5, but the group recently announced its break-up.

“Yeah, I was gonna come back, but I guess I'll try something else,” relays Chemist.

So far, Chemist's journey into something else has proved successful. The Audience's Listening was released in July '06 to critical praise from heavyweights such as URB, Scratch and Entertainment Weekly magazines.

The album is a mash of melodic jams, technical skill and eclectic individualism. For Chemist, the 12 tracks were more than just a hodgepodge of samples and Latin beats.

“My album is just trying to paint a picture with music. I want to make it visual,” he explains. “I want people to get these scenarios when they hear the songs. Like a movie without the movie.”

The tone of the album swerves from campy and comical with the intro track, “Motivational Speaker” to the percussion driven Brazilian style of “The Garden.” Chemist gets some vocal styling on the song “Storm” from MCs Edan and Mr. Lif.

“Storm” was recently featured in the film Stomp the Yard and was included on the soundtrack. MC Hymnal's monotone joined Chemist on the bouncing track, “What's the Altitude.”

With this album, Chemist hopes the audiences get more than just an earful of tunes.

Chemist is obviously no stranger to taking on eclectic endeavors when it comes to music. Now, at the Walt Disney World Concert Hall, he joins an event called Shadow of Stalin presented by L.A. Philharmonic. The late night, multi-media event intends to explore the Russian artistic movement created under oppression during the Stalin era.

A line-up of DJs and musicians including Chemist will collect on May 26 from 10 p.m. to 3 a.m. for a night entitled Pravda . The DJs plan to remix the music of Shostakovich, Prokofiev and Mosolov complemented by visuals from Russian films including Battleship Potemkin and Alexander Nevsky.

Up for a challenge, Chemist aims at mixing up modern style with classical tunes.

“It's typically not my genre of expertise [Russian constructionists]. I'm the kind of person you can throw anything at, and I'll make it work,” assures Chemist. “So, I have a bunch of Russian classical music from the mid-'30s, and I'm trying to figure out how I can incorporate it into what I do. So, it's pretty interesting.”

Cut Chemist has the audience listening, and at the Stalin event, they should be ready for something new.

“It's not going to be like a rave or hip-hop party,” says Chemist. “We're gonna listen to some classic and try to shut down some preconceived notions about what a DJ should really do. As long as you come in with that way of thinking, it should be OK.”

The Audience's Listening is currently available. The Shadow of Stalin series runs through June 3 at Walt Disney Concert Hall in downtown. Cut Chemist will also perform June 24 at the Hollywood Bowl. For more information, visit www.cutchemist.com.