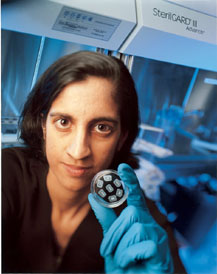 As people’s aging bodies wear out, go bad or break down, scientists and engineers are collaborating to create treatments and replacement parts for failing organs.

Researchers in the rapidly expanding field of bioengineering are working to replace not just knees and hips but also pancreases, knee cartilage, blood vessels and other deteriorating components of the human machine.

"It’s the intersection of three disciplines: engineering, medicine and biology," said Shu Chien, the chairman of the bioengineering department at the University of California in San Diego. He said the efforts include "organs, tissues, cells and molecules down to genes."

"The ultimate goal is the prevention, diagnosis and treatment of disease and injury," Chien said.

For example, Sangeeta Bhatia, a biomedical engineer at UCSD, marries biology and computer technology to create spare liver cells for patients with diseased or injured livers. "We borrow a lot of tools from the semiconductor (computer chip) industry to make tissues that function better," Bhatia said.

About 10 percent of the population is infected by the Hepatitis C virus, a liver disease for which there’s no effective therapy. "There aren’t nearly enough transplants," she said. "Our goal is to make implantable liver tissue."

Scores of university laboratories and hundreds of private companies, most of them small, labor in the bioengineering vineyard. Costs are high and successes rare. Only one out of a hundred startups makes a profit, according to Kyriacos Athanasiou, a mechanical engineer at Rice University in Houston and the president of the national Biomedical Engineering Society.

"The boundaries of humanity are going to be changed," said Lori Andrews, an authority on bioethics at the Chicago-Kent College of Law and author of a recent book, The Body Bazaar: The Market for Human Tissue in the Biotechnology Age.

Andrews worries, for example, about the spreading practice of selling sperm on the Internet, sometimes in the hope of producing especially handsome or intelligent "designer babies."

Meanwhile, the number of medical devices implanted in human bodies is surging. Nearly half a million coronary stents – metal gadgets to hold arteries open – are installed in human chests each year in the United States. There are 325,000 knee replacements every year, 165,000 artificial hips, 177,000 cardiac pacemakers and 2.5 million eye lenses after cataract surgery. About 46,000 people a year – Vice President Dick Cheney among them – get internal cardiac defibrillators to treat excessive heart rate.

Besides improving these mechanical appliances, some of which have been around for decades, researchers are concentrating on "tissue engineering." In this technique, scientists take living cells from the body, manipulate them in the laboratory to create functional tissue and put the new material back into the patient.

Robert Sah, a bioengineering professor at UCSD, uses tissue engineering to make replacement cartilage for arthritic knees, an increasing problem in an aging population. When other therapies – exercise, drugs or surgery – don’t work, Sah said, "let’s just get rid of it and start over."

Sah’s assistants produce fresh cartilage by shining light through a "mask" – a pattern of knee cells – onto a material similar to egg white in a test tube. The material hardens, and the process is repeated until it builds up a three-dimensional chunk of cartilage. The process resembles the way the semiconductor industry creates computer chips.

Similarly, Lori Setton, a tissue engineer at Duke University in Durham, N.C., injects a liquid gel into experimental rabbits’ knees to replace torn cartilage. The gel solidifies and serves as a scaffold to rebuild the body’s own cartilage cells.

Like most new medical technologies, bioengineered products are expensive. Dana Goldman, an expert on health economics at the University of California, Los Angeles, figures that providing an internal heart defibrillator like Cheney’s costs about $39,000 for each year of added lifespan. Medicare pays for the procedure, which adds 3.6 years to an average recipient’s life.

In the long run, however, new technologies might save money, Sah said. A knee replacement, for example, costs about $100,000; the synthetic cartilage under development ultimately could be cheaper.

The federal government, research universities, foundations and private companies are betting big bucks on bioengineering. The National Institute of Biomedical Imaging and Bioengineering, created in 2001, has $289 million to spend this year. President Bush requested another $298 million for 2005.

Here are some other examples of bioengineering work:

—Tejal Desai of Boston University has developed an artificial pancreas, about the size of a half-dollar, that can manufacture insulin for diabetes patients. The gadget is being tested in rats by iMEDD, a private company in Columbus, Ohio.

—Cytograft Tissue Engineering, in Novato, Calif., creates artificial blood vessels by taking a stamp-size piece of tissue from a patient’s arm, growing it in the laboratory, rolling it up and inserting into a vein or artery.

—Michael Dorman, a speech and hearing expert at Arizona State University, Tempe, inserted 16 tiny electrodes into the inner ear of a totally deaf patient and connected them to a small package of electronics implanted under the patient’s skin. The patient’s hearing improved enough that he could distinguish 1,400 different words.