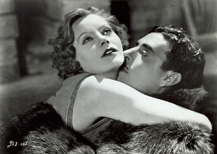 For a city that reportedly has little history to call its own, Los Angeles rewards the intrepid urban explorer with unique and charming treasures. Some of these gems can be found downtown, in the form of grand, old movie houses that have fallen out of general use.

Spearheaded by the Los Angeles Conservancy, Last Remaining Seats offers Angelenos a chance to not only see these gorgeous theaters, but an opportunity to watch a classic film and be transported back in time.

Established in 1978, the Conservancy's first success came in saving the Los Angeles Central Library. According to its Web site, its goals are to “preserve existing architectural resources by developing preservation strategies and by raising public awareness of the value of those resources through tours, lectures, publications and major programs,” such as Last Remaining Seats.

Each year, the Conservancy chooses a few vintage films to show in these remarkable venues, including the Orpheum Theatre (est. 1926) and the Los Angeles Theatre (est.1931).

The Orpheum originally showcased vaudeville and houses the only existing theatre organ on Broadway. The Los Angeles Theatre, the most ornate of the bunch with a French Baroque aesthetic, was the last of the great movie palaces built downtown.

Two other venues exhibiting films will be the John Anson Ford Ampitheatre, a remarkable outdoor space with a design that was built to resemble the gates of Jerusalem and the Alex Theatre in Glendale. The Alex is decorated with Greek and Egyptian flourishes and the auditorium is “designed as an “atmospherium” with an open air illusion, creating the feeling of being enclosed in an ancient garden.”

The pictures featured range from the sparkling romance Roman Holiday to the suspenseful North by Northwest to the gangster film Scarface (original). Also playing are the musical Yankee Doodle Dandy , Venezuela's La Blandra Isabel Llego Esta Tarde and Flesh and the Devil , starring the sublime Greta Garbo. Flesh will be accompanied by the Robert Israel Orchestra.

Each of these experiences offers a unique opportunity to see something unusual and venture off the beaten path. Why not make it a night and have dinner in Chinatown, Olvera Street or Little Tokyo?

For a complete program schedule and more information, call (213) 623-2489 or visit www.laconservancy.org.