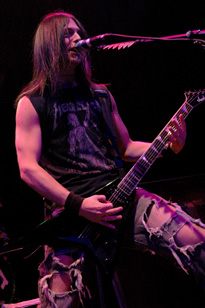 So, does anyone else remember when being a metalhead was definitive cool? Not like old school metal or anything, just around two years ago when four out of five kids at Warped Tour would be wearing an Orange County hardcore band T-shirts.

Taking things back to the early days of the OC hardcore and metal scene, the Confession brought the signature attitude, but opted to forego the theatrics that have made so many of its bands burn out. Though the group’s music is rife with guilty pleasure for all its bravado and effect-laden riffing, credit still has to be given for the band members not falling victim to taking themselves too seriously. The Confession’s charm lies in their no apologies confidence, which ironically proved to be more likeable than anything they could do with their guitars.

Taking stage with an equally impressive charisma, the Welsh rockers of Bullet For My Valentine had a vastly different approach, claiming a silent and stoic ownership of their audience. But even for all its commanding stage presence, Bullet fell flat in its consistency, with half the band’s songs being distinctive and creating a unique aural atmosphere, while the other half suffocate in monotony.

Appropriately closing their set with “Tears Don’t Fall,” the band showed how gripping and evocative its music can be, while maintaining its cred as shredding rockers. Though its full potential is surely yet to be realized, it’s still a shame it took Bullet over an hour of playing to pull out their big guns.
Article posted on 5/30/2007
This article has been viewed 1141 times.