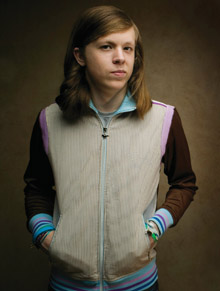 Dan Hunter, the wunderkind behind Play Radio Play has taken the ickiness of the teenage years and weaved it into an ingenious display of sound. This Dallas-Fort Worth native, with a mane of long hair and coy Southern charm pairs his Conor Oberst-toned voice with rich beats and playful lyrics. The end result is a debut so good, it’ll have you using your Postal Service CDs as drink coasters.

Hunter is not unlike any other teen living in the U.S.: for fun, he hangs out with friends watching movies like Grindhouse and listens to his favorite bands, Smashing Pumpkins and the Annuals. Yet, with all of his down-to-earth normalcy, he’s had problems as well.

Hunter’s adolescence was marred with tragedy that began with the death of his father just prior to entering high school. That event – a difficult experience for anyone – kicked-off a rapid descent into drugs and alcohol abuse. Hunter finally entered rehab and cleaned up his act at the tender age of 14. Soon after, his dismal outlook on life was replaced with a decidedly optimistic view. “Once I got clean,” he says, “I had a much more positive outlook on everything.”

From his newfound happiness came the need for expression. Hunter began to make music in 2005 – just for kicks – and posted those early recordings on Myspace.com.

Lo and behold, a star was born! The word of mouth about Play Radio Play spread like wildfire throughout this famous online community. So much, that those first songs averaged a wopping 30,000 plays per day.

To put that in its proper perspective: if MySpace “plays per day” were actual record sales, then Play Radio Play’s weekly numbers would have been enough to generate a top spot on the Billboard charts. That’s pretty impressive for a kid who didn’t even have a record deal.

But just when you thought this story couldn’t get any better, Deus ex machina swooped down in the form of independent music label Stolen Transmission. In 2006, they snatched up Play Radio Play and sent Hunter out on tour with Fall Out Boy.

However, this whiz-kid has his own thoughts about who he’d like to tour with. “I’d love to open for the Killers,” he fervently offers without hesitation.

Hunter’s love of Brendan Flowers and company has even led to an arresting cover of the Killers’ tune, “Mr. Brightside.” This song, as well as others with titles like “Confines of Gravity” and “Complement Each Other Like Colors” appear on The Frequency EP.

But a tiny bundle of electro-pop goodies isn’t all PRP has in store for fans. In 2008, his major label debut full-length album will be released on Island Def Jam.

This time around, Hunter is collaborating with producer extraordinaire, Garrett Lee. He’s the guy behind Kasabian’s razor-sharp sound.

Hunter has nothing but praise for Lee and the experience of working with him: “It was amazing!” he says. “He came up with a bunch of awesome new sounds. He definitely has a different perspective on the whole industry and music.”

Career determination and dedication to fans have helped propel Play Radio Play from a local whisper to an industry roar. Hunter and his music are slated for coveted slots on this year’s Warped Tour and also as the opening act for Under the Influence of Giants. These appearances, in support of the full-length album will bestow a much-deserved buzz to Hunter and his work. But he hasn’t let it go to his head. Hunter adamantly insists, “I still do it for fun, not for money, not for girls. Simply because I enjoy making music. Because I like putting stupid beats together with corny lyrics and dancing like a fool in front of groups of people.”

This type of humility makes it is easy to fall in love with Dan Hunter. He isn’t jaded (yet). He seems to be enjoying the ride.

That’s all well and good, but the best thing he’s got going on is that dork-next-door persona. When asked to divulge what he and his friends like to do for fun in the Texas sun, he starts to laugh.

“Well, right now, we’re watching Star Wars and getting ready to go to this show – if that tells you anything.”