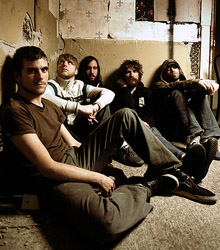 “Sunny Day Real Estate’s Diary: I remember staring at the artwork for days. It was beautiful and odd, and it said everything to me, or nothing at all, depending on how I felt.

My friend had brought the album back from Chicago to our small town in Maryland. I was living on his floor at 16 on a futon.

I have never in my life heard an album more times than Diary. Every single night the CD would spin from dusk until we awoke. I would lie in the dark absorbing every new sound with exaggerated attention.

Circa Survive’s On Letting Go is currently available.

“After we signed our recording contract with Icon, everything felt like a dream. I was constantly wondering what the one thing would be to make me feel like this whole thing was finally happening to us. All the interviews, photo shoots, music videos, constant trips to New York City, everything was great, but there was still something that hadn’t clicked with me.

A couple months ago, we were lucky enough to play a few shows with Jack’s Mannequin, and one of those shows was in Columbus, Ohio. It was a sold-out show, around 2,000 people.

I remember walking on stage, and everyone cheering during our set. It’s still one of the best shows we’ve ever played, and that little thing I was looking for clicked that night.

I’ll never forget the feeling in my stomach after we played our last song, and Columbus will always have a special place in my memory.” —The Graduate’s Corey Warning

The Graduate’s Anhedonia is currently available.

“Some moments in my music career that made me feel like my life was changing was during the times we toured Europe, Japan and Canada. I was in all these foreign places where only a few spoke English, yet somehow they knew all the lyrics to our songs.

It was astonishing to think that these kids, who loved your band, would turn their focus on learning words of a different language just to understand more of what we were singing about.” —Halifax’s Thomas Guindon

Just being around them and being from Memphis. It was something for me to see. It was for real.

I said, ‘Man I can’t believe some guys from Memphis put out an album, and the rest of the world is receiving it.’ Not only is it commercially viable, but it’s banging. That made me want to do what I do.”—Kinfolk Kia Shine

Kinfolk Kia Shine’s Due Season will be available June 19.

“The moment music really changed the course of my life forever took place in a small, smoky, rock club in Cleveland, Ohio. I was 15 years old, and a close friend invited me to a concert.

The band was Pavement, and they were touring in support of their record Crooked Rain, Crooked Rain. They put on a great performance, casting a spell on me and the entire crowd.

I immediately decided then and there on that car ride home that I wanted to be in a band, write music and travel the world with that music.” —Lovedrug’s Dave Owen

Lovedrug’s Everything Starts Where It Ends is currently available.

“I remember going to my first punk rock show. I was 16, the band was MXPX, and the venue was definitely too small for the amount of people in there.

What I saw on stage that night was three guys pouring their hearts out with every note, every drum hit, every jump, and I knew right then and there that I had to one day do the same thing.” —New Found Glory’s Cyrus Bolooki

New Found Glory will perform at this summer’s Warped Tour.

“Kurt Cobain. I was devastated when he killed himself. That was a defining moment for me in my personal musical history, because not only was I a huge fan of Nirvana, but they also opened a whole world of different music for me.

Not only were they a big influence on my musical taste when I was a kid, but I think if it had not been for Nirvana, I don’t think I would be in a band now and be one of the lucky few that actually has a career in music.” —New Found Glory’s Jordan Pundik

“When [Quietdrive guitarist] Justin and I were 12 and 13 years, Justin’s older brother was in a rock band. We would sit on his parents’ living room couch and watch his brother’s group as they prepared for a high school variety show with admiration and a little envy, hoping that someday our wide-eyed dreams of playing music of our own would be realized.

Eventually we donned guitars, and Justin’s parents put up with our dissonant tones until we finally learned how to play together. Now when we step on stage at House of Blues or Irving Plaza, I think of the pre-garage living room days with nostalgic joy and a smile, knowing that even when we could hardly play a G major scale someone believed in us.” —Quietdrive’s Droo Hastings

Quiet Drive will perform June 6 at Chain Reaction in Anaheim.

“I love going to see live music more than anything. I’ve been that way since I was 12. It’s hard to say what my exact favorite show was because I’ve been really blessed to see some amazing shows.

When I was 14 my friend’s mom took us to see Elliott Smith in a tiny 21-plus club. I saw Sunny Day Real Estate several times.

I saw the Promise Ring on the Nothing Feels Good tour. I saw Jimmy Eat World on the Static Prevails tour.

I got to see Ben Folds Five several times before they broke up, but probably the most epic thing I’ve ever seen was Radiohead headlining Summer Sonic festival in Japan.” —the Rocket Summer

The Rocket Summer’s How Do You Feel will be available July 17.

"The first time I met Scarface, and he told me I was born to do music.” —Stat Quo

“I think the show that affected me the most was a memorial show held by Social Distortion a few years ago when founding guitarist Dennis died. It was at the Irvine Meadows, and TSOL, Pennywise, Offspring, X and a few others played.

The stadium was full of people crying and singing along to every word, arms around strangers, hugging and putting lighters up in memory of Dennis, even tough ol’ Mike Ness got choked up a little bit.” —The Stranger’s Six Aaron Thompson

The Stranger’s Six’s A Date with Daylight is currently available.

“It was Coachella 2006. I had never been to an outdoor festival where tons of bands played over the course of two days. Everyone from Kanye West to Madonna was playing that year. I remember getting there and seeing thousands of people from all walks of life, scrambling around trying to see every one of their favorite artists.

The Yeah Yeah Yeahs were amazing. Daft Punk ended up being the highlight of the event. Another performance that blew me away was Sigur Rós. I was a huge fan and seeing them live was an awesome experience.” —Test Your Reflex’s Andrew Ampaya

Test Your Reflex’s The Burning Hour is currently available.

“Live Evil by Miles Davis had a profound and lasting impact on my musical life. So many different things about that record really blew my mind the first time I heard it; the constantly changing textures, the rhythmic inventiveness, the spare intensity of Miles’ playin’.

It all blends together into this tapestry of sound that’s both primitive and sophisticated at the same time.” —Toca’s Danny T. Levin