Rocco Deluca and the Burden: Trust Them to Blow You Away 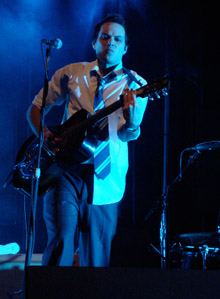 Born and raised in Southern California, today Rocco DeLuca is talking to me from a motel in Lincoln, Neb. He just played the Gibson Amphitheater with Keane in L.A. and is now cruising around the country so the rest of the population can take in the artist it recently discovered in I Trust You To Kill Me. These are the same guys that you’ve been watching on VH1 and hearing on the radio non-stop with their single, “Colorful.” DeLuca was brought up around music.

“When I was young my uncle and father were always playing and singing. I got involved and played around and went from there,” he remarks.

After years of playing with other bands around town and jamming with various musicians, but mostly doing it solo; DeLuca has found a real band.

“This is the first outfit I’ve ever really had,” he says. “This group of guys just works.”

Expanding on the group, Rocco has a deeper appreciation of letting the band, as well as the rest of his team, get involved: “I’m really proud to have surrounded myself with the right people. It takes a whole team to make it work. I laugh at the people that don’t get it. No matter how talented you are, you can make something really good, but there’s no way to do it right without the right team.”

The Gibson show is a testament to the previous statement. The band plows through gut-wrenchingly intense songs as if it’s been together for years.

DeLuca’s voice rips through the amphitheater like a shockwave of emotion. The sound echoing from his guitar – an instrument he custom made with legendary music craftsman, Pavel – surprises everyone in the audience.

Most people are probably only familiar with the single, “Colorful,” and haven’t opened the CD to hear the songs that really make up this band. DeLuca says, “I think it’s hilarious, trying to encapsulate what I do in a video or a single. But that’s the bait.”

The bait works. Audience members talk between the first and second songs using phrases like, “This guy is the real deal,” “I thought he was just a pop singer,” “Are they selling his CD here?” and the comment I make to my friend: “He makes me want to go home and play my guitar.”

The sound of a steel belly guitar is tough to master. Handling the slide and making sure you let it breathe and contain the metallic sound at the same time takes finesse.

With each song, the momentum builds and subsides like the wild tide of the ocean. DeLuca’s face winces with each note that he rips from the bottom of his heart. The kind face that graced the VH1 screen has turned to a brooding intense man, echoing the things that are most important to him with every song he lays down.

The song you hear on the radio, “Colorful,” is light and fun, a really inspiring track about being yourself. There are other songs that have a big sound. But DeLuca explains, “When we are most minimal and simple, and there’s a connection, that’s what I like most. “You can see it in their faces. They get it,” he adds.

DeLuca and his band have been on quite a ride for the past few years.

“I kind of freaked out when I opened for Roger Waters, and he came out and did The Dark Side of the Moon,” he comments on one of his favorite road moments. “I remember lying down on the grass while he was playing. I pretended [I was listening on] my headphones like when I was a kid.”

Our discussion drifts toward what’s next. “I’m looking forward to making the next record. It’s going to be a real emotional river – the stuff I truly want to put out there. I finally have the capability to do what I want. I feel like I’m on the right road, like I’m gonna do something important.”

Rocco DeLuca and the Burden will perform June 9 & 10 at the Hollywood Bowl with John Mayer. For more information, visit www.roccodeluca.com.