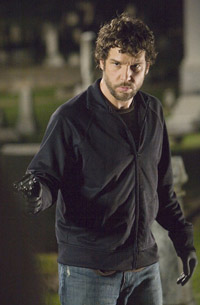 “God grant me the serenity to accept the things I cannot change, the courage to change the things that I can and wisdom to know the difference.”

Costner plays Earl Brooks; a successful and well respected Portland businessman, entrepreneur and philanthropist who has a dark secret: he’s also the elusive serial killer known as “The Thumbprint Killer.”

With the help of his imaginary ally, Marshall (played by Hurt), Mr. Brooks is able to commit the perfect murder over and over again, completely undetected. Mr. Brooks’ secret is threatened after being photographed by Mr. Smith (Cook) while making his first kill after a long hiatus.

Demi Moore’s character, Detective Tracy Atwood, also causes problems for Mr. Brooks when she becomes hell-bent on solving the Thumbprint Killer mystery. And as if he didn’t have enough on his plate already, Mr. Brook’s daughter Jane (played by Danielle Panabaker) suddenly comes home and quits school right after a mysterious murder was committed on her campus.

Though audiences may see Mr. Brooks as a role departing from Costner’s other characters, he disagrees.

“I think the movie absolutely runs parallel to everything I’ve chosen,” he remarks, “in the sense that I think it’s an original movie; I find it really familiar territory. I found him [Earl Brooks] to be a unique character that was insane, fun, selfish and highly entertaining. I thought, ‘That’s a really great character!’ You’ve got to like him until you start hating him.”

Mr. Brooks is able to keep his secret safe during the movie by indulging Mr. Smith’s desire to join him and partake in the thrill of serial killing.

“When the script came along I was in New Mexico,” explains Cook about his first thoughts on his character. “I was filming Employee of the Month, and I was pacing around reading it going, ‘You know what, I get this guy, this deviant, asshole, salacious – I just get it.’ I knew what to draw from; I had the idea from page 10 when I was reading it.

“Certainly after having done stand-up comedy for close to two decades and having people primarily know me as a stand-up comic, to be able to show another facet of the left side of the brain was certainly something I was eager to do,” he adds.

Cook shows his range as an actor in this film, and he already has several starring roles lined up in future projects including Good Luck Chuck, opposite Jessica Alba and Dan in Real Life, opposite Steve Carell.

“I always knew stand-up comedy would be kind of my back door, or the vehicle that would get me pretty much anywhere I wanted to go in this world,” Cook humbly remarks on his rise to stardom. “I really knew from the very beginning; if I did the hard work, and I was honest, and I just really gutted myself up on stage, that I could pretty much do anything from these performances. I felt like I was a very unsure person. But the one thing I knew was that if I did stand-up comedy and I dedicated myself to the art of stand-up comedy and respected it, that it would pay me back in many creative outlets.”

Fans of Cook’s stand-up act shouldn’t worry. He makes it clear, “I’m definitely always going to consider myself a stand-up comedian first and a Red Sox fans first.” In fact, Dane has been appearing at The Laugh Factory every night he can while he’s here in L.A. filming an upcoming movie.

Mr. Brooks raises some serious questions about certain assumptions we make about people.

Costner half-jokingly says, “Let’s be really honest, we could read five years from now that Bruce [Evans, the co-writer/director] is a serial killer. I mean, think about it for a second. I know Bruce, he’s a nice guy, but he wrote this twisted stuff. Who knows? I mean, how do we not know? I think none of us know; we think we know … we don’t know.”