Carly Schroeder: Fights for Her Right to Play in Gracie 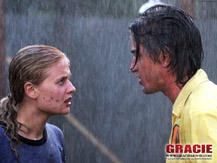 When I think of the average 15-year old girl, my kid sister, Camille, springs to mind. For fun, she sits around the house, talking on the phone to her boy-crazy friends while watching rap videos on BET and MTV. The only physical activity she gets is from shopping or working that trusty remote control.

Then, I met Carly Schroeder. She’s the ambitious and wise-beyond-her 15 years star of the new soccer flick, Gracie.

The movie, directed by Davis Guggenheim (An Inconvenient Truth), is sure to spark debate over the battle of the sexes. Gracie (Schroeder) is the nearly ignored daughter in a brood consisting of all males. Her days are spent struggling for recognition and equality within the family.

After the unexpected death of her soccer-star older brother, Johnny (Jesse Lee Soffer), Gracie longs to honor his memory. The only way she knows how is by playing the sport that he loved so much.

Sounds easy, right? Yeah, well, in 1970s New Jersey this game plan is anything but. Gracie is met with opposition at home, at school and in general. But like all determined protagonists, she overcomes her obstacles.

Schroeder breathes much life into her character. Like Gracie, she is a jock: an accomplished fencer, surfer and soccer player. She seems to have an acute understanding of the inner-workings of girls who have to fight for the right to be equals.

“If girls want to play sports,” asserts Schroeder, “they should be respected as much as the boys.”

This young actress’s perceptive nature and all-American demeanor have won her lifelong fans within the cast and crew of this film.

Guggenheim raves, “Carly is really one of the most gifted, extraordinary actresses I’ve ever worked with.”

Dermott Mulroney, who plays Gracie’s unsupportive father agrees. “[Carly] wound up being quite the little spitfire,” he says. “What is most impressive is what she’s done physically – learning the sport from scratch.”

Those sports scenes in which Schroeder appears are compliments of soccer choreographer, Dan Metcalfe. He worked as the “go-to” guy on films like Kicking and Screaming (2005) and She’s the Man (2006). Metcalfe’s expertise within the soccer world adds much-needed authenticity to the high pressure action scenes within the movie.

But he’s not the only soccer expert on the film. Gracie is loosely based on the family of Academy Award winner Elisabeth Shue and her brother, actor Andrew Shue (Gracie’s producer). As a youth, Elisabeth struggled to be as good as her brothers in sports.

“I was actually more aggressive than the boys because I felt I had to prove myself,” she says.

But as the awkward teenage years set in, so did self-doubt. Her journey in real life mimics that of her on-screen counterpart. Sitting next to her brother, Shue talks about buckling to adolescent pressures and temptations by rebelling and giving her power away to neighborhood boys.

”Like many teenagers at that age, I was vulnerable to what people thought about me,” she admits quietly.

In a heartfelt moment within the film, Shue, who plays Gracie’s mother, urges her daughter not to give up on her dreams. That residual pain from her youth figures prominently into the film, as well as Guggenheim’s (Shue’s real-life husband) direction.

The result is a well-rounded love letter to this family, its past struggles and the game that bound it together for life. The love and camaraderie on the project is evident in every scene, also in the closeness that the stars have when speaking about Gracie.

Mulroney and Schroeder interact with each other off screen like old pals. Even Guggenheim lets down his hair to poke a little fun at his spouse.

“My wife treats me with less respect as a director than people I’ve never met before.” He then lets out a hearty laugh.

Gracie is an important film that comes at a very crucial time in sports. With the past failure and upcoming relaunch of professional women’s soccer in the U.S., girls now have a new champion to guide them down the path to victory. Gracie takes its place alongside Bend It Like Beckham as a much-needed feminist manifesto.