Papa Roach: More Melody, Less Rap in Getting Away With Murder 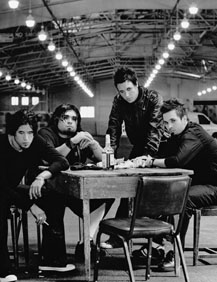 "I said, ‘I’ve had enough!’" said Jacoby Shaddix of Papa Roach, the moment he decided to put a stop to his hard partying ways. "I drank enough, I did enough fucking drugs and all that shit. Something had to give and that was it.

"But it gave me the opportunity to focus on my music, just fall in love with my music," continues Shaddix. "All I did was think, live, eat, shit, breathe music. I just had a one track mind – reinventing ourselves."

Reinvention is right, especially for Papa Roach fans who discovered the band after their breakout album, 2000’s Infest, which included metal-rap-rock tunes such as "Last Resort." Yet judging by their latest album, Getting Away With Murder, the band noticeably came to a fork in the road and decided to go beyond the media’s "nu-metal" tag by infusing less rap and more melody into their music.

"It’s a brave step for this band to take because a lot of our kids love metal," says lead singer Shaddix of the band’s evolution in sound. "We’ve got metal on this record, I’ll tell you that, but we didn’t set out to write just a metal record. We set out to write a diverse record that shows the different sides of this band.

"‘Scars’ is definitely a song that shows another angle, another approach. It’s a mid-tempo rock song. But for Papa Roach, that’s as close as we’ve gotten to a ballad, you know?"

For Murder, Shaddix enlisted the help of producer Howard Benson (Hoobastank, P.O.D.), well known for his work on vocals and for putting singers through what Shaddix refers to as "boot camp."

He remembers it well. "I was in a black little room, [with] no windows and no lights – just some candles, my lyric book, some headphones and a microphone," says Shaddix. "I would go sing until I couldn’t sing anymore, just emotionally get myself into these songs."

But hard work can sometimes take its toll, and producer Benson knew exactly what buttons to push to get Shaddix to give a more emotionally intense vocal performance.

"At one point, he was saying stuff just to bait me and piss me off," spews Shaddix, "and I shouted, ‘Fuck you Howard!’ I picked up a big old vase of flowers that my old lady had bought me and I threw it at this big glass wall, which shattered into a million pieces.

"Howard then turned to our manager and went, ‘Yeah, now we’re making a rock ’n’ roll record!’" Shaddix adds, "I love that dude to death, but damn, I wanted to smack him a couple times."

Lyrically, Papa Roach also stepped into a different realm. Whereas Infest is filled with lyrics displaying pain and anger, and 2002’s Lovehatetragedy spills tortured lyrics soaked in despair, Getting Away With Murder exposes more positive and optimistic messages.

"We write music that’s honest and real to us, and I think it translates to our fans," explains Shaddix. "The thing about this new album is there’s liberation, there’s hope. I’m not playing the victim in this album. I really just [have] a more positive outlook on my life right now and I’m expressing it through my music. No victim here."

And just like that pesky bug that has survived since prehistoric times, Papa Roach isn’t planning on musical extinction any time soon.

"I lot of people want this band to go away, and they’re going to realize that we’re not going away," says Shaddix emphatically. Although he overhears the media make hushed comments such as "they’re just a one-hit wonder," Shaddix has other plans. In fact, the message behind the album’s title says it all.

"That’s exactly what Getting Away With Murder means – Papa Roach isn’t going to be a one-hit wonder. We’re going to get away with it, we’re going to have more hits," Shaddix says with a glimmer in his eye, "and this record is going to make you realize why."

Getting Away With Murder is currently available. Papa Roach will be playing on Dec. 12 as part of KROQ’s Almost Acoustic Christmas at the Universal Amphitheatre, in Universal City. For more information, visit www.paparoach.com.