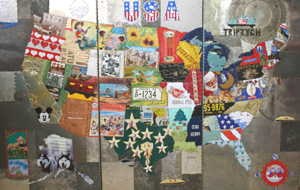 A museum dedicated to folk art always seemed a bit hypocritical to me. Or perhaps, anachronistic.

Born from the people, it seems that setting this medium in a privileged space (i.e., a museum) somehow defeats the purpose or removes it from its context. True folk art is stumbled upon in someone’s backyard or written about in The New Yorker as an ethnographic profile of an artist working in the medium of tinfoil.

But, then, doesn’t most art begin as folk art? Just as most music could be considered folk music until a label plucks a guy singing in a bar in Winder, Ga. and signs him to a record deal. And while folk art has existed in every nook of the globe, it still, somehow, always seems to evoke Americana.

An American Love Story: Works by Ramona Otto at the Craft and Folk Art Museum (CAFAM) exemplifies this. Ramona has created over 80 American flags out of found objects; Red White and Bob is made of recycled tickets from “The Price Is Right;” Triptych from Hotel Keys is a map of the U.S. on three panels created from magnetic hotel keys that Otto collected while following the concert tours of the equally American Crosby, Stills and Nash and Jimmy Buffet.

For Otto, the themes of America are flags, hearts and hands, and she explores these by exploiting objects found in this (in theory) Land of the Free. It says something – what, exactly, I don’t know – that when mentioning Americana and using it in a non-ironic sense, what’s evoked is flea markets and yard sales.

Americana should refer to anything American, including, say, American Apparel, yet it always evokes the past and often the antebellum south. As if we are all nostalgic for an America that can only be found, or created by found objects, but, never, created anew. CAFAM is located at 5814 Wilshire Blvd. in Los Angeles. For more information, visit (323) 937-4230 or visit www.cafam.org.
Article posted on 5/30/2007
This article has been viewed 3364 times.