The Fantastic Four: Rise of the Silver Surfer 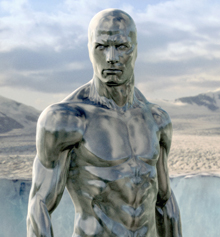 It’s heaping seconds and thirds of everything for this summer, as your favorite comic book heroes return with the sure to be blockbuster, The Fantastic Four: Rise of the Silver Surfer. Marvel Comics continues on its conquest into the feature film world, sporting 2005’s Fantastic Four $330 million dollars in its wake.

The unique chemistry of Silver Surfer’s cast and crew is built upon diverse backgrounds and histories in the entertainment industry; from theater, to television, to Director of Photography Larry Blanford’s years as a combat cameraman on fighter jets.

Never neglecting the value of a Stan Lee cameo or a voice-over by Laurence Fishburne, director Tim Story speaks the truth when he says, “We’ve upped the ante with bigger stunts, more action and more CGI characters and situations.”

My initial gut reaction to CGI is disinterest bordering on disdain. There is a magic inherent in films like E.T. where non-human characters must be hand-built and tangible. This sense of reality is often lost with the intervention of advanced technology and the overuse of CGI characters.

Silver Surfer does CGI right, though, honing its use to enhance character believability in a narrative where scientific creation is believed to lead to a better world. Serving as a life-changing character to comic fans worldwide, it was of foremost importance to this film’s creators that the Silver Surfer character ring true with Marvel fans.

With the pairing of WETA Digital’s advanced dimensionality CGI and visual effects supervisor Scott Squires, noted for work on such film as Star Wars: Episode 1 – The Phantom Menace, there’s no doubt about the ingenuity of the Surfer’s creation. In a world where guys made of rocks and girls who turn invisible are everyday elements of life, CGI allows for a ground-up creation of the Silver Surfer that will do his intensely complicated character justice.

The month was March 1966. Issue No. 48 of The Fantastic Four was unleashed on Stan Lee followers everywhere, and the face of science and superheroes was forever changed. Who has the capabilities to dramatically disrupt the already concentrated world of magical powers and sweet spandex outfits with intricate strengths and downfalls?

The cult following will tell you, it was the cosmically constructed Silver Surfer and his mentally controlled surfboard with capabilities independent of its rider. You would think that a near indestructible superhero who can see through time, harness cosmic energy and finds food, drink, air and sleep unnecessary would have no time for human qualities; BUT this is where you would be wrong.

The Silver Surfer becomes more than another Alpha male manifestation of overcoming every earthly element, as the Surfer’s “evil” paint job remains questionable and morally ambiguous. Instilling the Fantastic Four series and now the filmic world with a manifestation of reality amongst complete fantasy, the Silver Surfer’s development into his complex superhero status comes as a result of youthful disillusionment and heartfelt dedication to preserve his Utopian home.

The Surfer’s highly complicated and tragic past blurs the often clearly divisive line of good and evil in fiction, allowing the filmmakers of The Fantastic Four: The Rise of the Silver Surfer to make the story not only epic and action packed, but overwhelmed with the complexities of relationships and blurred lines of personal morality.

Phew. Never fear though, Jessica Alba is still here. Amongst the underlying themes of torrid love and a responsibility greater than that to yourself, the lighthearted comradery of your favorite Fantastic Four keep hope alive and drive the film forward.

The sophomore film for the four actors provides them with a newfound sense of confidence, as they are comfortable in their now worn superhero skin and explore the intricacies and quirks within their interactions. Silver Surfer’s relationship with Sue Storm is an intriguing point of speculation, as she’s able to see the youthful naiveté and overall good intentions beneath the Surfer’s impenetrable exterior.

Alba relishes in her character’s development and differentiation from her male counterparts.

“I love that my character has a connection with him,” she states, “because she’s maternal and has great feminine instincts.”

If the comic book series wasn’t enough to draw a substantial male crowd, Alba always does the trick. However, the contortion powers of Mr. Fantastic, the self ignition of the Human Torch and the literally ROCK hard body of the Thing triumphantly return with a charming vengeance.

Welsh Ioan Gruffudd, who plays Mr. Fantastic himself, is happy with the advancement of his character: “I’ve evolved a little bit over the last two years and grown older, so Reed Richards has evolved and has much more confidence and is much more in control.”

With Richard’s maturation comes his marriage to Storm, the catalyst event around which the tale of the Silver Surfer unfolds. Known to diehards as the “Wedding of the Century,” this groundbreaking event lives up to its name as the couple’s attempt to wed atop real-life Vancouver’s Metro Parkade is interrupted by the Silver Surfer’s destructive admonitions. The Fantastic Four are spurred into action (more important than what Richard’s was expecting on his honeymoon).

Like all things in fashion this summer, Silver Surfer goes global, magnifying the threatened New York locale of the first film to challenge the entire world. Not taking the filmmakers promise of “upping the ante” lightly, the Fantastic Four are drawn out of their hometown and setting for the original film.

Although much of the film is shot on set as well as on location in Vancouver, production crews were sent all over the world to the likes of Shanghai and London to lend the film a level of impending importance through authentic establishing shots. Emphasizing that these four are more world explorers than pure superheroes, Ree’s newest and greatest creation is a flying car reminiscent of an eco-friendly transformer. This “Fantasticar” is completely unconventional, but always manages to get the job done per the character of its inhabitants, the Fantastic Four.

Under Story’s direction, there’s no question this film will be fast paced, dynamic and exhibit thematic concerns with very real human imperfections. Born and raised in L.A., Story was part of rap group TDF that quickly advanced beyond its high school years to sign a record deal with Warner Brothers.

This process was tragically disrupted by the shooting of one of his group members, causing Story to change his creative tune. Turning to direct musicals, attend USC film school and quickly build a hardy repertoire as a music video director, Story’s rhythmic capacities as a rapper and his grasp on dynamic pacing from his musical immersion sets the stage for Silver Surfer’s explosive alliance of comic and film.

Come for Jessica Alba and the sinewy Silver Surfer; stay for the superheroes that will become your best friends.

As producer Ralph Winter states, “They have real world problems like we do. They can’t hide their powers the way mutants in X-Men movies can hide or change. These guys don’t; they’re right out there.”

The Fantastic Four: Rise of the Silver Surfer releases in theaters June 15.