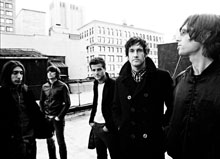 Who exactly do the members of the Bravery think they are? Here they had themselves all set to be the next big flash in the pan with a super-hot hit single, gossip-fueling drama with other bands, mohawks and guyliner. They would’ve been perfect in the long line of “next big things.”

But no, they had to go and release another album, and not only that, a legitimately good one to boot. What are jaded critics and elitist scenesters to say and do now?

If guitarist Mike Zakarin has his way, they won’t have much of either, but they’ll have a lot to think about.

“It’s a really solid, timeless record. It’s a record that I think will grow the more you listen to it,” he says. Though the Bravery’s distinctive synth-laden retro sound was what made their self-titled debut album such a huge success, Zakarin and his band mates, drummer Anthony Burulcich, keyboardist John Conway, vocalist Sam Endicott and bassist Mike Hindert, weren’t afraid of a little change this time around.

“By the end of the touring cycle for the first album, we were all listening to a lot of the same music, a lot of British invasion stuff, Rolling Stones, Beach Boys, a lot of stuff with vocal harmonies,” Zakarin says, setting the stage for the ensuing eight-month recording process the band entered after finishing touring.

That eight months in the studio, with a short break to test-drive the new material in South America, would see an entirely different Bravery emerge upon completion of The Sun and the Moon. “The musicianship and the songwriting quality have definitely improved,” says Zakarin.

“One thing people will notice is that it’s a bit less synthetic, and the instruments are more organic. Like we gave up the synthetic organ and piano sounds for actual organ and piano,” he adds. “At the end of the last record, we felt like we really used the synthetic dance grooves to get our songs across. We wanted to have songs all over the spectrum on this record, from straight ahead rock songs to acoustic songs, which was really nice for us.”

Though Zakarin may believe the stylistic focus of the last album to be more narrow by comparison, just to be fair, neither he or his band had very much expectation placed on it to begin with.

“The first record wasn’t really meant to be heard by anybody. We kind of made it for fun and then some people at a house party heard us and said we should really do something with it,” he says. “Now we have fans, so there’s more thought about actually making a good record and not using the same home-made production as the first one. But the thought process is exactly the same: what music are we not hearing that we want to hear?” Considering how much time the band spent on the road in support of its last album, Zakarin and his band mates had a lot of time to think about that process and evaluate how they would approach their follow-up.

“When you’re on tour, you just have a lot of time to yourself. You have a lot of time to listen to different music, hear things you never heard before and a lot of time to think,” he says. “I think the lyrics for this album are a lot more thoughtful and have more of a deeper meaning to them. The first record was the party record, you could dance the whole way through it. This one’s definitely more reflective.”

With this growth readily apparent in the Bravery’s lyrics on The Sun and the Moon, Zakarin too displays his own improvement in the technical mastery of his instrument, even if the roots of which are initially identifiable. Retelling his introduction into the world of strings and chords, who would have thought the indie-pop guitarist took his cue from none other than Guns N’ Roses?

“I’ve been playing guitar for a long, long time, and I think when I first discovered the instrument and got really excited about it was when my father brought home Appetite for Destruction the week it came out. I grew up in a pretty musical family so there was always different styles of music around me, from hard rock to Django Reinhardt, so in my spare time I play gypsy jazz guitar,” Zakarin says. “I tried to incorporate it a little bit into this record and it was really difficult. Some of the B-sides actually have a little bit of it, but you wouldn’t know it unless I said where it is,” he jokes.

Much as the Bravery’s members have grown as musicians, so too have they grown as performers. “The live show is a totally different beast now. We’re just a much better live band,” says Zakarin.

“The new stuff is more challenging for us, so it really pushes us to be better. For this record, everyone was forced to learn how to sing if they didn’t know how, just because there’s so many harmonies, and it kind of creates a real nice camaraderie that was just not there for the first record. I feel like the audience gets that too, and now that the album’s out, there’s a lot of sing-along parts to the songs and the audiences really latch on to that.”

Having bested the critics and the nay-sayers with its fan base still firmly intact, Zakarin credits his band’s longevity to its hands-on approach. “We’ve always been fully in control of everything, creatively and business-wise,” he says, adding with a laugh, “The best life lessons are VH1’s ‘Behind the Music.’”

The Sun and the Moon is currently available. The band will perform June 8 at Ventura Fairgrounds. For more information, visit www.thebravery.com.