Is It Just Puppy Love?: More students are opting for long-term relationships. 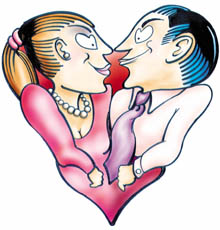 “When my 16-year-old daughter told me that her boyfriend was her soul mate, a smile came across my face,” shares Nancy Canales from Baltimore, Md. “I thought to myself, no one this young could actually know what true love means.”

Falling in love as a teenager is a more intense experience than when it happens in adulthood. A majority of teenagers and college students are recognizing these feelings and are becoming more serious about their relationships.

Kristin Palestina, from Paramus, N.J., says her mom never thought her relationship with Alex Gomez was going anywhere when they first became a couple in seventh grade. “She just shrugged it off and thought that sooner or later I would move on. Now we are engaged and are living together,” Palestina boasts.

A rising trend is relationships lasting five years or more in the adolescent population, says Ray Gonzales, director of research and reporting at the Office of Academic Records and Registrar at the University of Southern California.

“I think there has been some waning of the ‘hook-up culture’, where the model relationship was a one-night hook-up,” relays David Chandler, Interim Director of the Counseling and Psychological Services at Rutgers University in New Jersey. “While that continues to happen a lot of course, I have a sense that seeing one person may be more acceptable these days,” he adds.

Many students find emotional and social advantages to being in long-term relationships while still in school. When the relationship works, it provides security so that the couple can focus on their schoolwork or other areas that are important to them without having to pay so much attention to attracting someone new.

Ryan Mattioli, a pharmacy major from Rutgers University, says that by having a girlfriend, it allowed him to concentrate on school more.

“I think for me, as a graduate student, I was very lucky to be in a loving relationship. Grad school can be such an isolating experience, but my girlfriend helped keep me social as well as grounded,” Mattioli states. “We’re each other’s support system, even academically. We are always bouncing ideas for papers off each other.”

Marriage among young students is also increasing. A recent Louis Harris survey found that 96 percent of college students plan to get married or already are married. USC counts roughly 2,200 married students – about 6 percent of the total student population, says Gonzales.

USC psychology professor and marriage specialist Dr. Gayla Margolin has dealt with many married college students’ relationship problems. She says some problems married students faced include how to balance shared and individual time and dealing with pressure from attending school and usually having a full-time job.

“If they are stressed by school and work, it will spill over into the relationship,” she explains. “It’s important that a couple plans in advance and communicates to one another when they know they are going to have a stressful period. Also, plan days of recovery to spend time together after the stressful periods end.”

According to Chandler, relationships issues are among the most common reasons people seek help at counseling services.

In order for long-term relationships to be successful, the couple must be able to talk and listen to one another. Communication, based on honesty and trust means listening carefully and sharing your thoughts and feelings with the other person to show them that he/she is an important part of your life.

Chandler does not encourage or discourage long-term relationships in college. He says it depends on each individual relationship and how the people in it communicate. “If someone is lucky enough to found someone that complements them and makes them happy, they should stick with it,” he assures. “However, they shouldn’t let the relationship limit the college experience.”

One challenge is that often long-term couples may not have had much experience with dating other people, so they have some uncertainty about whether this person is really the best choice for them, says Chandler.

Jennifer Szczepanski, a sophomore from Barry University in Miami, has been with her boyfriend intermittently for four years. She says she has had experience casually dating other boys and found it to be troubling.

“Maybe the best benefit is we didn’t have to brave the treacherous dating pool,” she jokes. “Instead of feeling self-doubt and anxiety about meeting other people and impressing them, we’re free of those worries because we know we have each other.”

Couples may also primarily see each other and don’t have a chance to meet as many diverse people or have a variety of experiences as they try to find someone.

Doug Solomon, a student at Montclair State University in N.J., says when you are in a relationship you have to ensure that you go out with friends separately.

“By keeping some of your activities separate with different friends, you have new thoughts to talk about with your girlfriend or boyfriend,” he offers. “In a serious relationship, you get to meet a whole new group of people through your significant other.”

Daisy Adkins, a University of North Carolina graduate student, says she knows people misconceive her relationship with her boyfriend that started before they went to college.

“We met during our freshman year in high school and have been together ever since. Some people called us crazy when we were still together all throughout college,” she admits. “They asked us why we weren’t playing the field and dating other people. I could not explain to them what my boyfriend and I feel for each other. It’s something that only we could understand, and that is all that matters. This is what works for us and makes us happy.”