By Noah Kerner and Gene Pressman 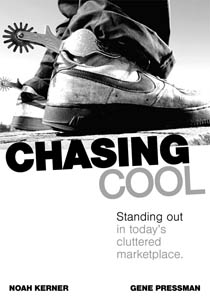 About five years ago, after years of DJing in nightclubs and a two-year stint managing online marketing for VH1, I co-founded a marketing and design agency called Noise. One of our first clients, Coca-Cola, one day called a meeting to tell us about a new secret product they were launching.

One of the executives pulled a bottle out of his briefcase and placed it in front of us. After a strangely silent pause, the executive suddenly says: “So, how do we make this thing cool?”

This question is constantly put to us by different companies from different fields, and each time what I really want to say is: If you have to ask the question, than you've already missed the point. Worryingly, marketers assume that “cool” – which is really business shorthand for ‘standing out’ – can be strategized when really it’s the outcome of a process.

I learned two critical lessons from writing this book. The first lesson is that the process is the prize. Gene Pressman, my co-author and the former co-CEO of Barneys, taught me the importance of living in the process and being OK not knowing where I’m going.

Companies like Google and Apple keep their edge because they let people go off into creative caves and constantly work on new ideas. Some ideas don’t make it to market. But some do.

In today’s hyper-connected attention-deficit landscape, we tend to avoid the process. It’s no wonder why everyone’s asking the short cut question: how do we make this thing cool?

In the process of writing the book, we interviewed over 70 of today’s business and pop culture visionaries – from Sofia Coppola and Talib Kweli to Tom Ford and Tiki Barber – and so the entire book-writing process was a creative journey into the unknown.

The other critical lesson I learned is how crucial risk-taking is to the core creative process. It takes real guts and personal vision to go out on a limb to try new things: but the rewards of a well-calculated risk are exponential.

In order to create a product that stands out in today’s cluttered marketplace, you need to be willing to take substantial risk—and face the possibility of real failure – in order to open yourself up for real successes.

In his 27-year career as former co-CEO, creative director and head of merchandising of Barneys, Gene learned a thing or two about taking risks. A legendary creative visionary, he is widely recognized for launching European brands like Armani, Versace, Prada and Manolo Blahnik in the United States.

Being unafraid to take risk helped Gene grow Barneys into an iconic international brand. Though the Pressman family was forced to file company bankruptcy in 1996, the Barneys brand Gene had created remains to this day one of the world’s great prestige brands. The company turns $300 million annual gross at the Madison Avenue store alone.

As Gene likes to say, hindsight is 20/20 and if I had to choose the third important lesson I take away from his experiences, it is that even the most calculated risks need to be managed.

RISK MANAGEMENT: THE GREATEST RISK IS NOT TAKING ONE

January 12th 1996: Barneys files one of the most infamous and contentious bankruptcies of its day. The crash was not pretty.

Over the past few years, I’ve had a chance to think about the true nature of risk. Risk is part of a yin-yang equation. It needs to be managed, which isn’t the same as smothered. Creative risk requires equally creative business management—and they need to be in perfect sync.

Looking back on my experiences at Barneys, I’ve never felt more creative. You don’t get to understand the true balance that needs to exist between risk and risk management until you’ve really lived both sides of the coin.

Look at some of the most successful industry pioneers. Steve Jobs was fired from Apple. A few of Ian Schrager’s hotels have been through bankruptcy. Richard Branson has been unsuccessful with various Virgin sub-brands. It’s hard to have major hits without some fairly big hiccups. Yet, when you look at the brands today – Virgin, Apple, Schrager, Barneys, and so on – they’re all very much on top. And all these individuals now perfectly balance risk and risk management.

When people of my generation think about Barneys most of us aren’t dwelling on the financial issues. I was shopping there from a young age and never stopped. I remember reading something about the bankruptcy at some point, but it never affected the way I felt about the brand.

What Gene (and his father of course) did with the Barneys brand itself was so powerful that it survived the financial mismanagement. In conversations with MTV co-founders Bob Pittman and Les Garland about early days at MTV, for example, it was clear how close the brand came to failing. Had it not been for the tremendous risks that they took, that brand would never have emerged as the all-powerful youth brand that it became. “The rule I live by in business,” Les Garland told us, “is that if it’s been done before don’t do it. You can’t sustain, especially in modern times, without taking the kind of risks necessary to truly stand apart. Everybody talks about avoiding train crashes. I say lets make a couple train crashes.”