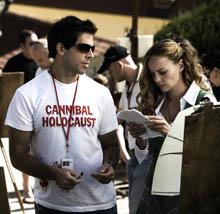 Success does not weaken Eli Roth.

“It’s very different being under the microscope. The first two movies were under the radar so it will be interesting to see the reaction to this one.” He’s talking, of course, about his latest film, Hostel: Part II, the follow-up to last year’s blood addled horror, Hostel.

At 35, the writer/director has well surpassed the airy water-cooler buzz most young filmmakers generate with their initial success. After the critical praise for his directorial debut Cabin Fever, and the surprise hit with Hostel (which was produced for $4 million and grossed over $50 million at the box office), the horror populace has heralded Roth as the genre’s most promising auteur.

“This really is a community,” Roth announces from the stage of the 2007 Fangoria Festival, where he and Hostel: Part II’s stars Bijou Phillips and Vera Jordanova answer questions.

“When I first came to L.A., I couldn’t afford to come to Fangoria, and now I’m previewing a film here.” He then proceeds to make a rather lascivious analogy, comparing the festival to … well, let’s just keep it at that.

Roth’s childlike enthusiasm is masked only by his sincere appreciation for the genre he, along with Rob Zombie and James Wan of Saw fame, helped redefine. Known for his free-reigned approach, Roth’s films depict violence in its most arcane and shameful manifestations, desensitizing the viewer into an almost blissful state.

Take for instance the infamous “eye-gasm” scene in Hostel, which culminates with a Japanese woman’s right eye dangling from its socket. To the faint of heart, this scene may be perceived as gratuitous or grotesque for the sake of shock value. But Roth’s admirers would beg to differ.

“I want to thank you for the best non-sexual orgasm I’ve ever had,” says a female audience member, commenting on the scene.

“I don’t know how to respond to that statement,” Roth replies. “But thank you.”

Filmed entirely in the Czech Republic capital of Prague, Hostel: Part II tells the story of three young, relatively inexperienced Americans, who meet a certain tragic fate not unlike the lead characters of the previous film. The sequel follows similar themes as the original, concentrating on the naivety of post collegiate Americans and their propensity towards victimization and perversity while abroad.

Roth does, however, make one slight adjustment – he casts females in the lead. “Both girls show incredible range in the film,” Roth gloats, speaking of Phillips and Jordanova.

“He is so passionate about what he’s doing,” Jordanova remarks, inducing a slight redness in the director’s face.

“At first I thought it was a film about girls,” comments Phillips, who plays Whitney, the free-spirited female lead. “I had no idea what I was in for.”

The same could be said of Roth, who turned down several lucrative offers to direct big-budgeted action films to write and direct Part II.

“I never thought I’d make a Hostel: Part II,” he admits. “Hostel was a small film made on a budget of $4 million. I never anticipated the positive reaction the film received and knew I couldn’t phone in a sequel.”

Location plays an important role in each Eli Roth film. Both Hostel and Hostel: Part II are shot entirely on location, in keeping with the director’s realistic approach.

Still, Roth credits his longtime production designer Franco-Giacomo Carbone as the true force behind translating his vision to the screen: “The whole theory behind Hostel is that you should never feel that you’re on a set. Franco plays a big role in how well that’s executed.”

This past April, fans were able to see Roth’s work in a shorter medium, the film trailer. Titled Thanksgiving, the two and a half minute short created as a bumper between the two films in Grindhouse, had many viewers asking, “Will there be a feature-length version?”

“I would love to do a Thanksgiving feature,” Roth replies. “This was an idea I had since I was 18 and probably the most fun I had making a movie.”

Don’t expect a theatrical release of the trailer any time soon, however. In the same breath, Roth laments how studio executives became disinterested with the idea after Grindhouse’s lackluster box office results.

Nevertheless, Roth is optimistic about the future of the Hostel franchise. Hence, are there any talks of a third film?