Celebration IV: How I learned to Stop Worrrying and Love Star Wars 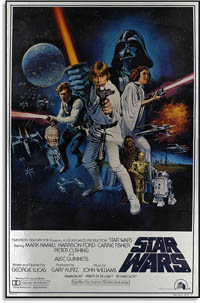 I pull into the parking garage of the L.A. Convention Center, and there it is. I haven’t been here five seconds, and on the back of a black SUV, the vanity plate reads: “4VR JEDI.” I shrug it off.

I enter the Main Hall. A 30-foot inflatable Death Star floats above. Two Stormtroopers, blasters in hand, survey the scene. Princess Leia in Ewok Village Garb holds the hand of an 8-year-old Luke Skywalker who struggles to keep his plastic lightsaber upright.

Overwhelmed, I quickly head to the bathroom. As I stand at the urinal, a man whistles the Imperial March in the stall next to me. I sigh.

I tried to come to Celebration IV, the largest Star Wars convention in the world, with an open mind, but all I can think is, “I am surrounded by dorks who take this crap way too seriously.”

I am a recovering Star Wars fan. I am one of those prototypical males born in the early ’70s who saw the film at age 4 and was instantly indoctrinated into the Holy Church of Lucasfilm. I collected the action figures, joined the fan clubs and rattled off dialogue verbatim.

But 1997 marked the beginning of the end. George Lucas re-released the original three films in “Special Edition” form, gumming up the originals with modern visual effects and superfluous deleted scenes. Two years later, Lucas delivered the coup de grace with the premiere of Star Wars: Episode I – The Phantom Menace, the first of three mind-numbingly bad “prequels.”

The new trilogy aimed its marketing machine at the under-10 set and left the older fans dazed, confused and disappointed. As a laughably pained Darth Vader yelled, “Nooooooooo!” in the final scenes of the last installment, Revenge of the Sith, all that was once sacred was now totally sullied. If there was ever anything cool about being a Star Wars fan, there was nothing cool about it anymore.

So when I heard the five-day “Star Wars Celebration” was coming to Los Angeles for the first time, I was reluctant to go. Still, I had always been curious about the previous Celebrations, held first in Denver in 1999. A question sparked in my mind: could Celebration IV actually make me a Star Wars fan again?

It’s off to a rough start. I find myself in a bustling, cavernous marketplace marked “Celebration Exhibit Hall.” Armed with cardboard boxes and nylon tote bags, fans zigzag through an endless array of Star Wars merchandise dealers.

Though surrounded by stacks of Millennium Falcon playsets, a seven-foot tall Chewbacca made of Legos and a life-size Jabba the Hutt model, all the buzz seems to be about an exclusive line of convention-only action figures. I jump into the nearest queue.

The long-haired teen in front of me explains that he’s been waiting for two hours to purchase a limited edition Luke Skywalker figure inspired by Ralph McQuarrie, the concept artist for the original trilogy. This was his second time in line.

“Celebration Autograph Hall” doesn’t offer much solace. Here, you line up to purchase autograph coupons for $10 a pop. Over 50 actors from the six films wait at nearby tables and, depending on how popular their character is, each actor’s autograph costs a different amount of coupons. Though some seem eager to please, some of the more popular stars are clearly over it.

Losing hope, I do what any man is search of answers does: I head to the “R2-D2 Builders Room.” Dozens of fan-built droids, in an array of shapes, sizes and colors, line the walls. Their makers are part of the 5000-strong R2-D2 Builders Club.

It turns out the West Hall of the Convention Center devotes itself almost entirely to fan-inspired creations. In one room is the Vader Helmet Art Exhibition, a series of works by 75 artists and designers such as Mark Ecko and Paul Frank.

Adjacent to this is “Star Wars Fan Movies.” In a darkened theater, I watch homemade shorts devoted to the series.

After about four films, I realize that every one of these movies is a comedy. Star Wars nerds seem to laugh the hardest at anything that pokes fun at Star Wars nerds.

Over the next few hours, I attend “Billy Dee! The Lando Diaries,” where Billy Dee Williams recounts his days as administrator of Cloud City and former pitchman for Colt 45 malt liquor. I sneak into a preview of the upcoming “Robot Chicken” special. Lucas, playing himself in action figure form, laments the misguided “Star Wars Christmas Special” on a therapist’s couch. It seems even Lucas is capable of laughing at Star Wars.

As I exit the theater, and as bustling fans rush by on their way to the Star Wars Tattoo Show, the Celebration IV Costume Pageant or maybe even Star Wars Laser Tag, I suddenly realize I’m the only one here not having fun. I’m the only one who still feels cheated and abused, who is still angry about the maligning of the Classic Trilogy!

And then, it finally hits me: I am the dork who takes this crap way too seriously.

The next day, on the Concourse Stage, a P.A. announcer reminds people to turn off their cellphones, camera flashes and replica lightsabers. Moments later, Anthony Daniels recalls his favorite moments playing the droid C-3PO.

“But what I am most fond of,” says the slight British actor, “is how the Ewoks greeted me in Return of the Jedi.”

Everyone in the theater knows exactly what he’s talking about. A cheer goes up. “Wait, wait, wait!” Daniels yells. He runs off stage, implores the moderator to introduce him again, and runs back on. This time, the entire crowd bows down rhythmically before Daniels, chanting like the Ewoks did when they mistook Threepio for a god.

Media photographers race to front of the room to capture this cultish moment of group dork psychosis. And 20 rows back, flashes going off all around, I bow and chant in unison with the crowd. It’s fun to be a Star Wars fan again.