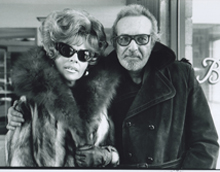 Filmmaker Dan Klores (Ring of Fire: The Emile Griffith Story) casts a jaundiced eye on romance and obsession in his new documentary, Crazy Love. The ripped-from-the-headlines tale tells the true tabloid story of Burt Pugach and Linda Riss, best known to Jerry Springer fans as the titular couple in the episode, “I Married the Man that Blinded Me.”

In 1957, Pugach was a renowned pioneer ambulance chaser who met a beautiful, young Linda in the park. He pulled up in his powder blue Cadillac convertible and attempted to woo her as she walked along the avenue.

Later that night, Riss received a dozen roses delivered to the cramped apartment that she shared with her mother, grandmother and aunt. Soon, the rich lawyer won the heart of the young beauty.

When Riss discovered that the man sweeping her off her feet was married, she quickly ended the relationship. He did not take the end of their courtship well.

Sometime later, Linda got engaged to Larry Schwartz. Pugach hired some thugs to blind her with lye.

It was a scandal that sold millions of newspapers. Pugach was sent to prison for scarring and blinding Riss.

In 1971, the lawyer was released from prison. Friends of Pugach and Riss got them together to meet.

Riss went hoping for an apology. He declared his love for her. Eight months later, the victim married the perp.

The most shocking details of the story are told by Pugach and Riss as they recount the events that lead up to their 33 years of matrimonial bliss. Riss (now Linda Pugach) lights up cigarettes and candidly describes the incident while wearing her big blonde wig and oversized sunglasses to hide her misshapen and scarred eyeballs.

She is a quintessential caricature of a Jewish woman of a “certain age.” A dark humor drips out as she describes the tragic details of her life while drinking from a cup labeled “No. 1 lawyer,” her husband’s coffee mug.

Klores pushes the envelope of good taste, much like his television predecessor Springer, as he explores the facets of this macabre love story. As the story unfolds, Klores delves deeper into Pugach’s id. He refuses to admit his culpability while professing his insane obsession for Riss.

The director is master of the extreme close up, but uses very few alternative camera angles or techniques. The film falls into the “talking heads” category. Big hair, chain-smoking heads with thick New Yawk accents.

It is still riveting. Pugach and Riss are two trains headed down the track in opposite directions. The audience is glued to their seats, anticipating the disturbing images of the wreckage.

With the nation clamoring for the latest exploits Paris Hilton, Britney Spears and Lindsay Lohan, the media celebrates our most base human emotions and sensationalizes stupidity. The Pugachs were ahead of their time.