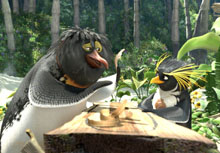 Fresh on the heels of the Oscar-winning Happy Feet comes Surf’s Up, Sony Pictures Animation’s entry into the newly minted “computerized animated penguin” genre. The flightless bird in question here is Cody Maverick, a little surfer with big dreams of escaping Antarctica and hanging 10 all the way to the tropical Big Z Memorial Surf Competition.

Apparently, it’s illegal to do an animated film these days without parodying some aspect of pop culture, so the target this time around is surf documentaries like Endless Summer and Riding Giants. Thankfully, the movie parrots them brilliantly, from slo-mo shots of surfers gliding through crashing tubes to handheld interviews of half-baked penguins waxing philosophic about the sport’s existential truths.

Though the plot is worn-out and a smart 7-year-old can probably see “the big twist” coming a mile away, the visuals, not the script, are the attraction here. The programmers over at Sony have pretty much rendered real water useless, as the photo-realistic shots of penguins paddling over giant, rolling surf are nothing short of sublime.

Why exactly the story calls for penguins to be the main characters still isn’t clear to me, but at least we can take solace in knowing that when global warming melts all the real penguins into extinction, we’ll still have these cute little animated ones safely stored on hard drives for future generations to enjoy.

Surf’s Up releases in theaters June 8.