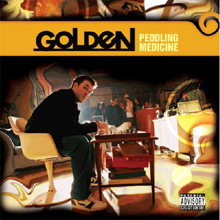 Minneapolis-based rapper, Golden, drops a mediocre take on hip-hop with his less than clever debut, Peddling Medicine. These 18 tracks do very little to solidify Golden as a true purveyor of sound.

Insert this CD into any player, and prepare for a dull and lifeless first track in “It Ain’t Me.” The song, in which Golden seeks to separate himself from all the other white rappers before him is, in a word, “wack.” Even “Elevator Music” featuring Fergie from the Black Eyed Peas is pointless, as she’s grossly underutilized on it.

In his vain attempt to assert a sense of individuality, Golden neglects to show listeners any talent lurking underneath all that whining. His rhymes are completely lacking in wit or complexity, and his beats do very little to even win him cred as a club-hit maker.

He does score big with songs like “It’s Magic” (which features the kick-ass hook from the classic rock jam “Magic” by Pilot) and on “Mourner’s Kaddish (Prayer for the Dead),” which pays homage to his Jewish heritage. That aside, Golden is bound for discount bin obscurity.