The Airborne Toxic Event: About to Swallow Us Up 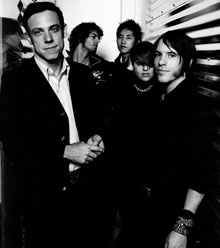 “Is this them?” he whispered into my ear as we peered up at unknown faces.

The trio then struck their last chord leaving the stage, and my belly rumbled.

“I’m starving – how much longer is this going to be?”

“This band will change your life, they’re going to be BIG, and I mean HUGE,” Barry, my music aficionado friend informed me.

With expectations soaring, and my blood sugar levels crashing, I hoped that I’d made the right decision to cancel my dinner date plans and bust out a 40-minute drive to the Echo. A group of five dressed in black smuggled themselves and their gear onto the stage. House lights turned on, yet they still seemed in the dark.

The mic stand was a bit too close to my face, and it knobbed out into the audience from the keyboard. I took a step back as a sweet face with lots of pep and big blue puppy eyes smiled out of the black. Scraping the keys with his brown belt and shining buckle, he leaned towards us, adjusting the mic.

A stillness of bated breath, the lights went down and the boy mouthed into the falling mic ending my query: “We’re the Airborne Toxic Event.”

Striking the keys, the moments and the floor, the band members came to life out of the shadows and vibrated their instruments, slapping us with staccato bits of sweet and sour. Like a coin tossed up into the air, they began their set with “Wishing Well” which was a good, bubblegum chewing, lollipop-licking tune, but with a biting intelligence and a swig of whiskey mixed in.

Is it possible to be haunted and electrified at the same time? I wanted to drink up their lyrics, click my heels to their rhythm and jump around like I was in a bouncy room just because they were THAT GOOD!

Who the f**k were these guys? Where did they come from? And what kind of name was “The Airborne Toxic Event”?

Hailing from the East L.A. hipster scene known to be heavily peppered with ripe talent for the plucking, lead singer Mikel Jollett began a solitary journey into night, and then managed to book a gig as a duo act with drummer, Daren Taylor. Inspired by personal tragedies during the winter of 2006, Jollett stared darkness in the face and decided to make it dance, but he needed more. He needed to have a full band.

The genius of company soon came with violinist Anna Bulbrook, long-time friend and schooled keyboardist Steven Chen and bow-busting bass player Noah Harmon. Just to clarify, the serendipitous collection of sprites was actually named for the pivotal chapter in Don DeLillo’s White Noise, but could never be classified as such.

With a built-in crowd of 200-plus at every show (ahem, including their first), it’s no wonder that the U.K. is eating the band up quicker than crisps and ale with a recent label signing to Square and a tour across the pond last month. They’re like tears that taste good, a dash of the Smiths, a pinch of Postal Service and a flick of Franz Ferdinand, but dare I say … sweeter?

Electric, endearing, eclectic and essential, no doubt this quintet will be banging it out overseas only to come back to a universal following. Headlining a night with other local, chummy favorites, the Happy Hollows on June 9, this show will be one for the bragging books: you’ll be saying “yeah, I saw them at the Troubadour,” while everyone else will only have ticket stubs for them at the Wiltern or the Greek. June 7 will be the group’s first night back in front of the City of Angels as the opening act for, gasp, a big Henry Fonda Music Box show with the Kaiser Chiefs.

Mark my words, the Event is the best thing I’ve experienced in, I don’t even know how long – and it has only been in existence since August! The band is about to infect us all with its delicious toxicity.

Good luck getting tickets, my dearies, this is THE hottest new band to burn up the music scene. Once everyone else catches on, it’ll be a brushfire likened to the one lit a few years ago within the “Arcade.”

The Airborne Toxic Event’s UK 7” EP is currently available. The band will perform June 7 at the Henry Fonda Music Box Theater in Hollywood and June 9 at the Troubadour in West Hollywood. For more information, visit www.myspace.com/theairbornetoxicevent.