Campus Circle > Music > Interviews > One AM Radio
Archives
Music: Interview [One AM Radio]

The One AM Radio: L.A.'s Sexiest Vegetarian Cozies Up In Los Feliz 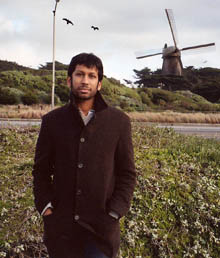 I met with PETA’s 2006 Sexiest Vegetarian nominee, the One AM Radio (née Hrishikesh Hirway) for vegan fare in Echo Park on a rapidly cooling evening. Hirway, the son of Indian immigrants, raised in Massachusetts, is the nucleus around which the One AM Radio operates.

He mixes electronic elements with acoustics, layering drum loops, horns and strings, covering his dream pop missives with his buttery voice. A Yale graduate who uses words like “bifurcation” casually in conversation, Hirway is well-spoken and honest, hand selecting his words with care.

Growing up in a household where music was a constant presence, Hirway began banging away at the piano at age 8 until he moved behind the drums in high school.

Though guitar soon infiltrated his repertoire, and he’s slowly picking up the cello, Hirway regards himself as a drummer first and foremost. In college, Hirway made a tape of two guitars and a sample drum loop with “little drifting samples of talk radio murmuring in the background,” which he classified as “songs for sleep” and named The One AM Radio. He gave this tape to his sister and his friends.

Hirway continued to make music and give it to people under the moniker the One AM Radio. Partly because the artists he loved, conceptual solo artists like Björk and Beck, did not play under their given names, and also because it seemed like it would have been a wasted opportunity to not have a name for himself.

“One more chance to add a level of text to it,” he explains, “whereas my name doesn’t really tell you anything.”

While still in college, Hirway landed a dream show alongside Ted Leo, of whom he was a huge fan. Afterwards, Leo asked if he could buy a CD. When Hirway admitted he didn’t have one, Leo invited him to record with him in Boston over spring break.

“I asked Ted if he had any songs that didn’t make his solo debut, and if he’d be interested in releasing a split with the two songs I recorded,” he relays. “And he said yes, which was crazy!”

The One AM Radio’s first recording became a split 7-inch with Ted Leo.

In 2000, Hirway came west for his first show in Los Angeles at the Smell. Eventually, Hirway made his way back permanently, drawn by the film industry, the warm weather and the people.

Now three full-length albums deep, Hirway recently came off a tour supporting his February 2007 release, This Too Will Pass. This third album, perfect for wintry months and emotionally rocky times, is the result of a long year that saw Hirway reconnecting with his roots.

The desire to step away from things he was involved in while living in L.A., to work on the record in a vacuum, led him to Mumbai, India for two months and then to many cold months locked in the room of his childhood home in the Boston suburbs.

“The pieces I came up with [in Mumbai] ended up being the foundations of the record,” he shares.

The songwriting process for Hirway is like a collection process: “I just try and keep track of things and save them. Eventually, they build up and I begin to piece them together cohesively.”

Hirway, who also takes photographs, recently showed some of his pieces in a gallery in Arizona.

“The stories in the songs end up being snapshots taken from one part of my life and then re-contextualized in another thing. So they’re usually specific images, ideas that come from my real life but then by the time they end up in a song, it becomes an allegorical, ‘once removed’ kind of thing.

“‘Lest I Forget’ (off This Too Will Pass) is like a note to myself. ‘This is a Document’ (off A Name Writ in Water) is the same way. I realize that regardless of whatever it is, whether it’s good or it’s bad, I’m documenting my life, which is an important thing – to me, if to nobody else.”

The One AM Radio will perform June 10 & 17 at Tangier Restaurant in Los Feliz. For more information, visit www.theoneamradio.com