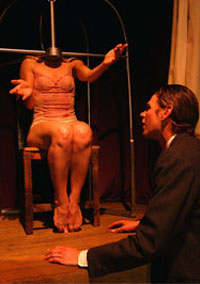 I never even knew Electric Lodge housed a theater. I always assumed it was really a hotel. Not that I’ve lived in Venice very long as an adult, but it just surprised me to discover that theatrical productions thrived on Electric Avenue.

The theater is quite cute, as my two friends and I would find out one recent Saturday night, complete with nibblings on delicious buttermilk pie from Porch Pies during intermission.

“Headless,” however, is not very cute. It’s a dark drama about Frank, the eccentric son of a wealthy family who inherits a lot of money and instead of doing something productive with his life, becomes obsessed with the headless woman at a traveling carnival.

What’s obvious is that Frank has problems. Without being completely clear, the audience comes to understand his problems revolve around his mother, death, fire and a range of emotions including anger, repression and hate.

Jon Beavers plays Frank to perfection. He’s such a weirdo, not only does he creep you out, but you almost root against him, while also being totally sucked into his bizarre, mysterious charm and watch with interest to see if the other characters fall for him, too.

The headless woman, Net, is also strangely unlikable. Portrayed by Salli Saffioti (Welcome to September, A Day Without a Mexican), Net is angry and guarded. Having once been the carnival’s headlining Tarot Card Reader, she’s now relegated to the “headless” woman booth after a scandal involving her lover and fire.

The courting between these two characters is odd. I know some people get turned on by rejection and sour attitudes, but it’s never been my thing. Though I bet many people can relate, it makes me uncomfortable. (Let’s just say I live in a fantasy world.)

While the script by Lea Floden and direction by Dan Bonnell are commendable, it’s the three young chicks that steal the show.

Best of all is Net’s 8-year-old daughter, China. She has inherited her mom’s tarot abilities and spooks people out with her skills. She’s adorable as she interacts with Frank, teasing him that “he likes her mama.”

I’m always amazed when kids can act. Because it seems that all kids act, just not on stage. But when you ask them to act or speak in front of other people, they get quiet.

So it impresses me then when a kid can act like a kid in front of lots of people. That said, actress Kaylin Stewart is captivating.

She is the character you’ll grow closest to, loving her more and more with each scene. You’ll also feel bad for her; she’s stuck being raised in a traveling carnival.

Her 12-year-old sister, Crystal is angry, like her mother, and distrustful. Yet the audience can feel her pain, more so than her mother’s, because she seems like a victim. I’m sure she wouldn’t choose to travel with the carnival if it hadn’t been her fate.

Lauren Clinton (Bridge to Terabithia) plays Crystal with conviction, proving pre-teens can be fierce. Trying to hold down her carnival duties and raise her little sister, she’s also the family member who tries to protect her family. Her story is downright tragic.

Last is Natalie Floyd who plays Lisa, the snake charmer girl. Slim like Paris Hilton and sporting a flirty, girlish Southern accent, she’s the most intriguing of the bunch. Mainly because you know it would probably be the most fun to be her (even though she strikes me as someone having a heap of problems).

“Headless” takes place in the ’30s in the dustbowl plains of the Midwest, but somehow sitting in my theater seat in Venice, the play’s issues all seemed relevant today.