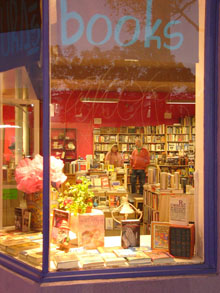 “A chance encounter with the exact right book might create an explosion in your head. Not only could your world change, but the rest of the world could change”—L. Buzzbee, author

This is the quote you’ll find posted throughout KULTURAs Books. It’s a quote that finds itself much at home amongst the selection of rare, second-hand and out-of-print books and other various this and thats that align the store’s walls and sit upon its many shelves, just waiting to change the world.

Upon first visit to the new location of KULTURAs on Ocean Park Boulevard, you can tell there’s something special about this place. Whether you’re looking for a more recently published book or one that’s been around for ages, there’s a good possibility this bookstore has it.

Andrew MacDonald and Irene Coray opened KULTURAs in the DuPont Circle area of Washington, D.C. over 20 years ago. Last year, they decided to “load up the gypsy bandwagon of books” and head west. MacDonald says they love D.C., yet felt the heavily political atmosphere and transient feeling of the city began to grow old.

“Everyone is on their way to somewhere else,” relays MacDonald, and so too was KULTURAs. The things they did enjoy about D.C., however, were the same things that attracted them to the Santa Monica area. There’s a certain mish mash of cultures in both areas, with Southern California boasting a lighter atmosphere.

Family was also part of what influenced Coray and MacDonald’s move, as well as the climate on this side of the country. Coray is originally from Chile, and Southern California shares a very similar landscape. Thus, they opened their doors in the Sunset Park area of Santa Monica in January of this year.

You can definitely still feel the newness of the store even with the older, worn-in merchandise. The displays are set upon the tops of cardboard boxes in some sections and mismatched shelves are packed with books on all different subjects ranging from politics (a large section probably due in part to coming from the District) to a rapidly growing film and art section (to be expected with the move to the heart of the entertainment industry).

KULTURAs, unlike most used bookstores, has a larger than average section dedicated to foreign language books, mostly French and Spanish. Not many small bookstores carry foreign language published books. Now you may be able to find that special French book you’ve been searching for among their selection.

One of the most attractive and unique aspects of this book haven is the shelving unit that contains their large collection of first editions. Specifically a Shel Silverstein first edition of Different Dances that particularly caught the eye of yours truly.

There’s plenty of floor room to grab one of these wonderful books and sit down to peruse its pages, plus throughout the store are a few old-style chairs and a vinyl covered bench.

KULTURAs also carries many other “sort-of vintage” items. There’s a box of used CDs and a small but growing stack of DVDs.

A section is located in the back for some thrifty, vintage clothing items and a few pieces of furniture and one or two shelving units. Hanging on one of the first walls you see when entering the bookstore are six paintings for sale by a local artist named Daniel Francisco, who happens to be the 13-year-old son of the owners.

Future plans for the store include carrying more clothing and offering some organic and homemade beauty products. Essential oils, stationary and other household knick-knacks are all products you might see here soon.

Coray and MacDonald definitely want to make KULTURAs more than just a bookstore. The well organized simplicity, decently priced used books in good condition, wide selection, numerous assorted goodies and very homey feel all make this family-owned bookstore a welcome addition to Santa Monica. It’s a place with a little bit of everything and a whole lot of heart.