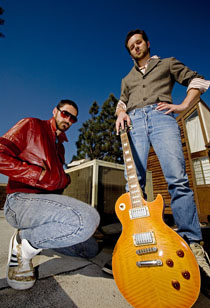 Ryan Merchant (lead vocal) and Nick Merwin (guitar) make up Neurotic City. Playing all ’80s dance hits ranging from Michael Jackson’s “Thriller” to New Order’s “Blue Monday,” the group actually started out as a joke. But when promoters and party planners started requesting them more often, the duo decided to take it to the limit.

At O’Brien’s, Ryan Merchant took the stage wearing Ray-Bans (jet black, totally 80’s). He had on a tan Members Only jacket and a tan colored fedora.

Performing staples like “The Promise” by When in Rome and “I Melt with You” by Modern English, the crowd was totally engaged. The venue was packed up until their very last song, girls dancing all around. You could hardly move through the place.

Talking to Merchant earlier in the week, he professed, “Live performance is the best part for me. The energy you get back is based on the energy you put in.”

And it showed. During three 45-minute sets, it was as if he was following a Jane Fonda workout.

“We’re here to have a good time and make people dance.”