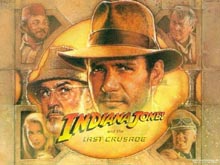 There are three films in the Indiana Jones trilogy. Count ’em, THREE.

Why does everyone, including myself, always overlook the second of the three, Temple of Doom, as if it was the unwanted middle child?

It might be the fact that the enslavement of children and manual extracting of a human heart from their breathing chest is unappealing, but with Goonies sparkplug Data (“That’s what I said, ‘a Boowhy twap!’”) and monkey brain ice cream, it’s up to you to give this film the attention it deserves.

Meanwhile, the first and last of this epic trilogy will be showcased at the historical New Beverly Cinema for three glorious days. Raiders of the Lost Ark and The Last Crusade are heartwarming, entertaining and suspenseful, even after hundreds of viewings.

With Sean Connery, Nazis, beautifully void Starlets and a bucking, young, perfectly dirt smudged and scruffy Harrison Ford, this double feature is a great way to start your week.

Try and think of a better way to spend four hours on a Sunday night than reliving the greatest adventure series movie magic could produce.

This bargain double feature is the New Beverly’s specialty, changing its film lineup every two or three days and uniting the evening’s program by a common thread.

(During film intermission it’s fun to try and connect the dots between the evening’s films).

While tickets are only $6 with a student ID, and general admission is only $7, the theater’s historical past as a 1920s vaudeville theater and bustling nightclub makes these films inherently more appealing than your local Mann theaters.