Adrian Grenier's Shot in the Dark: How much does your father mean to you? 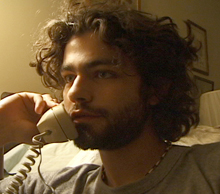 The documentary Shot in the Dark is about a young man’s (Adrian Grenier of HBO’s “Entourage”) quest to find his biological father, John Dunbar, whom he hadn’t seen since he was 6.

After watching it, I figured I would feel one of two things: be completely skeptical as yet another tragic child finds a sense of self or meaning by reconnecting with his father – who abandoned him no less; or, this would unleash a river of emotions and finally move me to find my own biological father (whom I still have no desire to meet).

What I was left with was not only a reaffirmed love for my own family and those who’ve shaped my life, but a deeper appreciation for an actor who allowed himself to be vulnerable and give the general public personal insight into his life.

A tough subject to tackle, Grenier’s family and friends do manage to address the topic with remarkable ease.

The documentary initially was conceived when Grenier and his friends were joking that he should arrive at his father’s doorstep, while one of his friends was quietly filming in the bushes. Grenier eventually found that he really wanted to transform the idea into a full-blown project about “the importance of having a father” and how “having a father figure affects our culture.”

Through Shot in the Dark, we’re introduced to Grenier’s mother, Kareese, the woman who acted as both parents for the actor. She’s by far the strongest person throughout this entire ordeal.

Her story of how she met Grenier’s father, his conception at a retreat center in Ohio, her candid feelings on raising Grenier and her expectations for Grenier and his father’s reunion brought tears to my eyes. Kareese is a woman who had the fortitude to raise her son so that he never felt the lack of a “father figure.” When Grenier asks her questions that are no doubt uncomfortable, her openness allows a greater understanding of how she shaped her son’s life.

When Grenier first arranges to meet at his father’s residence in Lancaster, Ohio, there’s some reluctance from Dunbar because his wife doesn’t want Grenier to visit. For years, Dunbar’s wife harbored resentment toward Grenier.

When Grenier finally meets Dunbar, although Grenier’s best friend jokes that they were hoping to find a neglectful, mean individual who didn’t care that he had “abandoned his son,” the exact opposite occurs. Dunbar is a mild-mannered, soft-spoken soul.

His explanation on never seeing his child is one mixed with guilt, as he explains that because he was so in love with Kareese, when she left him, he couldn’t bear seeing his son without seeing her. “I was in a deep depression and to see you, I had to see her,” his father relays.

Still, Grenier and Dunbar connect and try to establish the bond that never was. They go to a music store where Dunbar buys two acoustic guitars, and the men jam out together.

Interestingly, those familiar with Grenier will note father and son’s musical inclinations, as Grenier is an accomplished musician (check back Campus Circle issues for a feature on the Honey Brothers).

After their initial meeting, Grenier returns to New York and loses touch with Dunbar for a few months. When he does make a call to Ohio, Dunbar’s wife, Debbie, is on the other end. She was excited to talk to Grenier, and happy to have him visit.

She offers her apologies for keeping Dunbar and him apart and reveals that early in her marriage she was told she wouldn’t be able to have children, so what she feared the most was that she would lose him because he had Grenier.

On the outcome of the final project, Grenier shares, “He [my father] likes it a lot. Not only because he is proud of his son, but because he was given a rare opportunity to restore a relationship with me.”

Though this piece was made purely for personal achievement, audience members will identify with a least one person in the film. Most important, Grenier hopes the audience “walks away with a more objective sense of the truth and learns not to judge their parents for being imperfect.”

I’m still working on the latter…

Shot in the Dark will air on HBO through June 30. For complete listings, visit www.hbo.com.