The Daniel Pearl Foundation: A million Mighty Hearts sustain the life of a slain journalist. 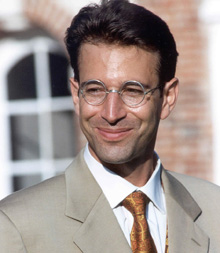 Every generation sees an event so heinous that leaves an indelible mark on those that bear witness to it. On Jan. 23, 2002, American journalist Daniel Pearl was kidnapped and then violently murdered in Karachi, Pakistan. Americans were shocked at the graphic nature of the crime.

Al-Qaeda operatives looking to make a name for themselves intercepted Pearl as he was en route to an interview with Sheik Gilani, a reported spiritual leader. After making demands on the U.S. Government for the release of Middle Eastern prisoners accused of terrorist activity, Pearl’s kidnappers brutally slaughtered him and sent videotapes of the massacre to various news outlets to showcase their crime. He was 38.

Although the Middle East has had its fair share of political strife throughout the years, it was particularly ripe for such a tragedy at this time. Accusations of abuse at the hands of American soldiers at Guantanamo Bay began to surface.

Even U.S. Consulate official Randall Bennett warned Pearl not to pursue his meeting with Sheik Gilani due to violent opposition within the region. This reporter was basically in the wrong place at the wrong time; he was a Jewish-American on assignment in the land of Islam just months after the 9/11 attacks.

Pearl, whose nickname was Danny, had an idyllic childhood. He was born into an East Coast family that relocated to Los Angeles soon after his birth. He grew up in Encino, where he excelled in music. Even as a youth, Pearl was remarkable and spirited.

After completing his studies at Birmingham High School, he attended and graduated from Stanford University with a degree in communications. During his stint at the prestigious institution, he also co-founded a student newspaper, the Stanford Commentator.

From there, he traveled abroad, and then went on to work for publications in Massachusetts, San Francisco and later for the Wall Street Journal.

While on assignment in Paris, Pearl met Mariane van Neyenhoff, the woman that would become his wife. The couple was married in 1999, one year after they met. In 2000, they relocated to Mumbai where Pearl took the helm as the South Asia Bureau Chief for the Wall Street Journal.

This accomplished young writer had already made a name for himself as a force within the world of investigative journalism. His love and respect for other cultures shone through in his pieces. These works were powerful; Pearl broke news on several top stories of the day, such as Al-Qaeda’s money-laundering systems and examining the criminal process of convicted shoe-bomber Richard Reid.

Just a few short years into their marriage, the Pearls discovered that they had conceived a child. Mariane chronicles the excitement of this time with her husband, touching moments and conversations with him, as well as the tumultuous moments leading up to his death in her memoir, A Mighty Heart. In light of the ferocious nature of Pearl’s disappearance and death, the book served – for many – as a way to connect with this journalist; to put a human face to such a savage tragedy.

It is this commitment to the memory of her slain husband, as well as the worldwide interest in his work that led Mariane (along with friends and family members) to form the Daniel Pearl foundation. This organization serves to champion the myriad causes that Pearl stood for in his lifetime.

The Daniel Pearl Foundation has launched many important initiatives such as Prepare and Educate Aspiring Reporters for Leadership (PEARL). This program serves as a way to introduce and excite young people into an interest in journalism through internships and Web-based news services. Even Daniel’s father, Judea – a UCLA college professor – has lectured across the U.S. with Akbar Ahmed, a renowned Islamic scholar.

Then there’s the Daniel Pearl Fellowship, which is awarded to journalists from countries Pearl worked in like Saudi Arabia, Turkey, Ethiopia, Iraq, Jordan, Pakistan, Palestine and Egypt, to name a few, that have “emerging free press.” Each recipient must be between the ages of 25 and 35 and have the ability, through his or her work to help nurture East-meets-West harmony and understanding.

Even communities throughout the United States have taken to honoring the fallen journalist by renaming schools and erecting community centers in his memory. In Middlesex, N.J., there is the Daniel Pearl Center. This local association has taken to upholding the message of tolerance and education by hosting interfaith outings between Jewish and Catholic youth.

The foundation has also created numerous awards to bestow upon individuals who tirelessly work across the globe to promote peace and understanding among foreign cultures. Recently, the Daniel Pearl Award was presented (via the American Defamation League) to leading Middle East expert, Robert Satloff.

This journalist uncovered and published stories of the Jewish Holocaust within various Arab nations. He is also formidable in sharing with the public the daily trials and tribulations of the Middle Eastern people.

Along with the hard work arising from this respected organization is a feature film, based on Mariane’s best-selling novel, A Mighty Heart. The film (of the same name) stars Angelina Jolie and Capote screenwriter Dan Futterman as this loving couple whose days together were sadly numbered.

In preparation of his life-changing role in A Mighty Heart, Futterman practically snuck into Pakistan in order to retrace the steps of his real-life subject matter. This was especially important because the actor, himself is a Jewish-American, and there was the fear that he might fall victim to violence resulting from his heritage.

“It was important to shoot in the actual places where things happened,” Futterman tells WashingtonPost.com.

The actor, who bears a striking resemblance to Pearl, won his role after having a two-hour meeting with the film’s director, Michael Winterbottom (Welcome to Sarajevo).

Jolie also manages with chameleon-like effortlessness to transform into her role as Mariane. As a mother, herself, she is sympathetic to the people and situations that she is portraying.

“I remember thinking, ‘I can’t imagine [pregnancy] not having the father with me, and being concerned for his life, and trying to eat, and trying to remember to get some sleep and take a deep breath.’ As a woman it just made me so much more connected to her,” Jolie is quoted on Premier.com.

Between the release of the film A Mighty Heart, its literary counterpart, the efforts of the Daniel Pearl Foundation, as well as a published compilation of fifty of Daniel Pearl’s finest published works during his career entitled, At Home in the World, this heroic man’s life will serve the greater good for generations to come.

And although he would never get to see the birth of his only son, Adam, that child and the hope he gave his parents in life and in tragedy will live on and thrive with the same force that Daniel Pearl did.

For more information on the Daniel Pearl Foundation, visit www.danielpearl.org.

Special Features
Secret screenings. Redacted scripts. How they make the twists in ‘This Is Us’
105 views

Special Features
Virtually every film coming out this fall
731 views