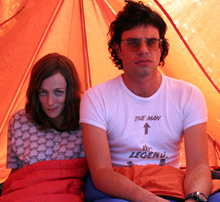 Not too many independent movies can rise to the challenge of crossing over to the masses and becoming insta-hits. It will be interesting to see how Taika Waititi’s feature Eagle vs. Shark fairs.

The awkwardly humorous debut could easily be classified in the same vein as Napoleon Dynamite, but definitely more complex in subject matter. Set in New Zealand, Jarrod Lough (Jemaine Clement), a geeky, opinionated video store clerk has been training as a martial artist to defeat the bully who plagued him in high school. He goes to his local fast-food restaurant, Meaty Boy, and meets the girl behind the counter, Lily McKinnon (Loren Horsley), a shy, quirky woman who is instantly enamored with Jarrod.

Jarrod invites her to his animal costume party, and she shows up in a shark costume. The eagle, Jarrod, challenges his guests to a video fighting game, and shark Lily beats him, to Jarrod’s surprise. Very quickly the two become attached at the hip.

The story follows their adventures on Jarrod’s journey back to his hometown to meet his high school tormentor. Lily meets Jarrod’s family, which is dysfunctional, to say the least. It’s here that Lilly discovers the family bond, and perhaps the reason why Jarrod is the egoist and abrasive person he is.

His family immediately takes to Lily and inducts her into the family. She soon finds that while spending time in this new area, she’s learning more about herself, and that she may not be as in love as she once thought. Jarrod also finds himself in a different place from where they started.

Their interactions are awkward and uncomfortable, but still amusing. Whether they end up together is what makes the movie charming.