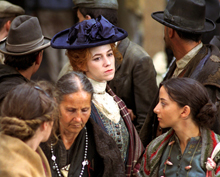 Presented with Martin Scorsese’s seal of approval, Italy’s Golden Door tells the now classic story of immigration from the old world to the new. (In fact, the Italian title, Nuovomondo translates to “new world,” a better title than “golden door,” which sounds like the name of a Chinese restaurant.)

Directed with a certain lyricism by Emanuele Crialese, the film tells the story of a poor Sicilian farmer at the turn of the 20th century who hopes to better his family’s circumstances by transporting them to America. A widower, Salvatore Mancuso (Vincenzo Amato), supports his two sons – one mute – and his mother, a mystical and superstitious peasant called Fortunata. Also along for the voyage are two young women journeying to the United States with the promise of marriage.

Later, an English woman, played by Charlotte Gainsbourg, sets her sights on the gentle Mancuso clan. A woman without a country, it’s unclear if “Luce” is a prostitute or just abandoned, but she needs a husband for entrée into this new world. She reeks of desperation to start life anew.

Much of Golden Door takes place both on the boat ride across the ocean and stuck in the limbo that was Ellis Island. The film thrusts these eager and anxious immigrants into a sort of purgatory with America playing the part of the Promised Land. This limbo is both treacherous and uncertain as the possibility of being sent back, or repatriated, represents a strong possibility for everyone.

One charm of Golden Door lies in the way Crialese illustrates the imaginings the Sicilians have for this magical foreign land. Early on, the Mancuso family is shown postcards of typical American farmers standing next to chickens the size of elephants and onions the size of cows.

The Italians talk of trees heavy with ripe coins and rivers in California that flow with milk. These fairy tales prod a family to trek half way around the world in hope of a better life in a way that is both naïve and triumphant.

Golden Door offers an opening into the heart of the immigrant that preceded almost all of us in the not-so-distant past of the last century.