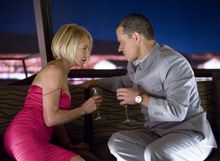 The cast of the Ocean’s movies always remind me of the kids in school who exuded seemingly effortless cool and charm, something the rest of the class either despised or envied. The same can be said of the Ocean’s films themselves.

Many people loved the old-school charm of Ocean’s Eleven. On the other hand, when the popular kids get a little too full of themselves, the charm can turn into smugness.

Many critics thought this was the problem with Ocean’s Twelve. Now that the popular kids have been knocked down a peg or two, they’re seeking atonement with the rest of the class, and they’re successful with Ocean’s Thirteen.

Danny (George Clooney) and the boys are back in Vegas to avenge Reuben (Elliot Gould), who suffers a heart attack after being double-crossed by Willie Bank (Al Pacino). The ambitious and duplicitous Bank is about to open his latest casino spectacle, and it’s up to the Ocean crew to literally and figuratively “break the bank,” so to speak. This includes everything from rigging slot machines to sabotaging a hotel reviewer’s service to mimicking a natural disaster.

In order to steal $250 million worth of diamonds from Bank’s casino, Damon’s mission is to seduce Abigail, which he does with the help of some ultra powerful pheromones. Their awkward chemistry is hilarious to watch and makes me curious about their deleted scene from Ocean’s Twelve.

The direction by Steven Soderbergh and the script by Brian Koppelman and David Levien keep the action moving at an expeditious pace. Many movies seem to start fast out of the gates, but then lose gas toward the end. That wasn’t the case here. This is a rare instance when the movie gets better as it goes along with a satisfying payoff (or two or three) at the end to reward your time.

Casey Affleck and Scott Caan are reliably funny, while Brad Pitt, Andy Garcia, Eddie Jemison and David Paymer all perform their own comedic moments. There honestly isn’t a weak link.

This is one of those times when you’ll want to spend two hours watching the cool kids do what they do best.

Ocean’s Thirteen is currently in theaters.